The. Coils will bend, no problem. Use a screwdriver or covered pliers to spread them. It will spring a little when you screw it together. This is fine.

mysterion said:
Hey nice job on these! Im interested in the 18mm basket screen….. do you just take the standard screen out, and that basket slides right in? if it goes on the post…I didnt see the post sticking out the bottom of your first photo. Does it still mate with 18mm glass?
Click to expand...

Thanks man. It’s fun. The past day I’ve been hooked on the 18mm basket screen mod. With very little material it pumps out very thick vapor with a very robust flavor profile. A little bit goes along way and to much becomes to restrictive. All the posts have different thicknesses and the 14mm works best for me. I do work the screen out and stretch it a bit so it fits snug. Let us know how it goes.
D

Tried to load just enough for one draw. Got down to .03 grams.
Had to turn the heat down, it was too hot at 777, so 735 with slow draw.
It tails off at the end, but still have to pull the WeedEater off to clear it.

Using the shovel head this does not cover the screen but it still annihilates the load.
Coffee grounds.

I noticed when ground fine, dumping the bowl, it comes out like dry sand.

So I separated and eliminated most of the wiggle, but it still has a little, though very minimal. I guess I'll just live with it, since it seems to work. I never had a weedeater, only the B-2 and VROD. I'm super impressed with the B-1, it snaps a bowl quick, but it does dump the heat and take a little longer between hits. Overall I feel like it's the most like taking a lighter to a bowl with how quick and unrestricted it is.

Since I'm almost all flower, I may end up leaving it on there as my daily. It may be easier for when people are over, as I always had to coach them on how to use the VROD and the draw, or turn it up so that technique didn't matter and it just roasts it. The B-2 eliminated the draw coaching mostly, but was restricted and if you were used to a lighter, it was different. This though I feel like is just a put it on, and rip it.
M

Welp I haven’t been on here in a bit since the FlowerPot + WeedEater and T-Bucket have been my endgame vapes for quite some time now. Come to find all these upgrades and went on a bit of a shopping spree.

Just ordered the B1 to replace my WeedEater, the heat shield (thank god for this!!) and the new improved universal carb cap. Ready for the upgrades!!

Will anyone who has a B1 & also a Showerhead tell me if the SH carb cap can work with the B1 - even if only in a pinch to get by if need arises.

Summer said:
Will anyone who has a B1 & also a Showerhead tell me if the SH carb cap can work with the B1 - even if only in a pinch to get by if need arises.

I can't answer your question, but...

A carb cap is super unnecessary with the B1.
M

I got 4mm pearls but looks like most here got 3mm. Any reason why 3 has been so much more popular?
D

Just received my Black Friday order. Everything except the B1 was in the box. Anxiously awaiting an email response about my B1. This is my first flowerpot. The auber and accessories burning the box while I wait for the B1. The Black Friday sale already burnt a whole in my wallet

I too have a B1 on the way.
Yong Coconut, When I ordered a cap for the B1, I ordered the wrong one.
B1 needs the universa cap. 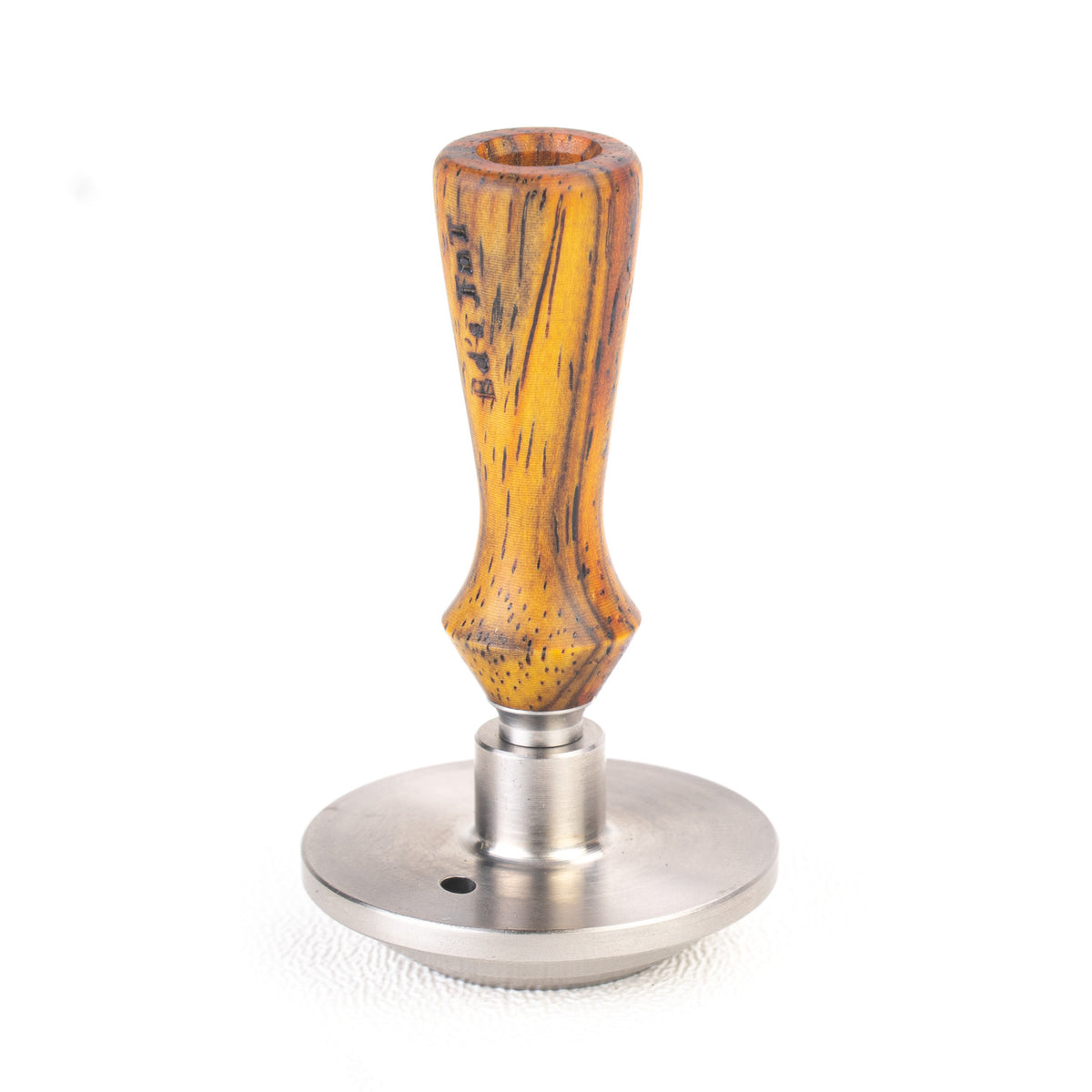 This newly designed Universal Carb Cap is the "Mother of all Carb Caps". It is made from Grade 2 Titanium and it is specifically designed to fit into all of Cannabis Hardware's vaporizer lines, including ALL Flowerpot V-Rod, Weedeater,T-Bucket/Tsunami, B1 and B2 heads and Banger set ups. Grade 2...

This one fits, the other one (Duce) does not.
David

It stays pretty cool. I run low 600s and can pick up the heat stand by the shield no problem.

ManFlies352 said:
I got 4mm pearls but looks like most here got 3mm. Any reason why 3 has been so much more popular?
Click to expand...

3mm balls offer more surface area and volume. The restriction they add can also make it easier to hit consistently.

I put this chart together when I was experimenting with ball loadouts:

Compared to 3mm, 4mm has ~20% less volume and ~40% less surface area. In practice the numbers will vary a little as the balls aren't precisely sized.
M

^^Thank you for this! I went back to check my order and I actually did get 3mm so nevermind, I’m good! I was high when I ordered and some reason thought I got 4mm

SEARCH for the treasure...

David Root said:
I too have a B1 on the way.
Yong Coconut, When I ordered a cap for the B1, I ordered the wrong one.
B1 needs the universa cap.

This newly designed Universal Carb Cap is the "Mother of all Carb Caps". It is made from Grade 2 Titanium and it is specifically designed to fit into all of Cannabis Hardware's vaporizer lines, including ALL Flowerpot V-Rod, Weedeater,T-Bucket/Tsunami, B1 and B2 heads and Banger set ups. Grade 2...

This one fits, the other one (Duce) does not.
David
Click to expand...

I bought the “new” universal cap, it has ONE HOLE, two weeks later, it’s now TWO HOLES. Didn’t find I needed any cap with the B1, and I assume even if you liked it, there wouldn’t be much purpose to actually SPINNING it, as the air is already getting mixed through all the 3mm balls. Spinning the universal cap on the NEW B1 top cap doesn’t work well anyway, mechanically, as for whatever reason, the B1 TOP CAP, has a BEVEL, instead of the more square GROOVE on the OG WEEDEATER top cap, so it doesn’t spin in a track, but not a big deal to me, as I mentioned my B1 draws great with no cap, and if I wanted to cap it, I wouldn’t SPIN it anyways. Photos shows the difference.

Prior to the screen baller (B-2) 3mm was too restrictive for my taste. Think there was some clogging of the bottom holes in the original design. So 4mm gave the airflow that I prefer.

But less of an issue with the screen version's (all that CH currently sells). However I have not gone back to try only 3mm balls since getting the screen.

Since I was excited to try some 5mm ALN balls from TVKE5...

Far from scientific and systematic but I went with a combo of balls yesterday, and layered 3mm boro, 4mm ruby and 4 of the 5mm ALN. No real scientific reasoning behind it. But dang something there (one of the components in the mix or they synergy of all 3?) led to a massive hit. Best and quickest extraction yet. Had previously been running everything (flowers and double deckers) at 685. Following this change, I've backed it down to 650 end still getting fabulous rips.

But not super confident in those boro to sapphire rations. Put in ALN first, surrounding it with sapphire then filling in with boro. Did this in 3 layers (IIRC, might have been 2). Then put an ALN and a mix of 3 and 4mm in the tube leading to the baller nut (which I cannot get off even after a iso soak, making reattaching the top and bottom a delicate PITA).
Last edited: Dec 5, 2021
D

Thanks for the pictures RustyOldNail

The instruments are custom!

Known to some and enigma to others

The Stray Fox said:
What a day, what a day. I landed a Timberhead Pid/IH in Ed’s MAW raffle. Woot Woot. I’m definitely going to have to figure out how to rock my CH gear with it. I’m pretty sure I just need a 710Coils 20mm coil.

To top it all off my CH BF order showed up and things are looking up. The two handles I got really go well with my first and CH even manage to get me a two tone like I was hoping for. What a nice set. On top of all the hustle and bustle of the sale they caught my FOMO handle order and combined it with my BF order and then credited me one of the shipping charges!

Boy these handle are going to look good with that Timberhead PID.

Where did you find that debowler/container you have on the tray?

CharmCityVapeGuy said:
Where did you find that debowler/container you have on the tray?
Click to expand...

That was made by New Vape/CH. They dont make them anymore but if you show interest on their Discord server we are trying to get @Ivy_NewVape to see if they will do a run of them. They did a release just not too long ago but they sold out fast.
M

My entire order just shipped! Stoked to get the B1 and other goodies

B1 will B here tomorrow.
And a few other things.

SEARCH for the treasure...

David Root said:
B1 will B here tomorrow.
And a few other things.

Are your BALLS ready?
M

I’m just stoked I won’t need the carb cap anymore to get huge hits from the WeedEater. Loved my WeedEater but the carb cap was almost necessary. The restricted airflow the balls give is gonna be perfect to make this a one-hander vs two hander for taking hits
D

Same here. Been using a home made cap on the WeedEater.

RustyOldNail said:
Are your BALLS ready?
Click to expand...

Got a Universal cap coming and a B1 with 3mm balls. and a pax loading tool.
Cap is for the WeedEater. Probably use the B1 and part with the WeedEater.

A couple Eds handles. The original one for my Shovelhead bowl has one or two threads on it. It wiggles and flops around. I have been using a small cup holder with 10-24 threads instead.

Going to send the handle back and see if they can add another thread or two.

ManFlies352 said:
I’m just stoked I won’t need the carb cap anymore to get huge hits from the WeedEater. Loved my WeedEater but the carb cap was almost necessary. The restricted airflow the balls give is gonna be perfect to make this a one-hander vs two hander for taking hits
Click to expand...

If this is what you're excited about, I can confirm. I often used the cap for the best hits, and I had several pieces where it just didn't work having to hold everything to grab the cap and remove it. I've been able to use any and all of them now, since I don't need an extra hand to hold or grab the cap. Like I said, it's just like taking a lighter to a bowl now, to me at least. I like being able to use pieces that didn't really work before now.
You must log in or register to reply here.
Share:
Share Link
Top Bottom