Took a snow day to do vape software debugging. Rewrote the temperature control algorithm for at least the fifth time. Still not the way i want it to perform, but i understand it a whole lot better now. And it is a lot simpler. The temp stays (mostly) in a 5F temperature band. Not too bad, but not what i want for the final product.

i instrumented the code to write the temperature readings and the dutycycle values into eePROM (three readings per second) so after a test session i can download the values into my TabletPC for analysis. And, you can imagine my surprise when i discovered that the predominant value being used for the dutycycle is 1. Out of a range of 0 to 1023! WTF i had naively expected it to be about 200.

Clearly i don't know enough about the PWM built into the PIC nor how to configure it properly. oh goody! Yet another learning exercise.

Otherwise i am very pleased with this unit - it is physically more sturdy and the components on the PCB are cool to the touch.

Start up, i.e. time to vape temperature, is about 20% faster at 14F per second. And the run time for a fully charged battery pack is 42 minutes instead of 35 minutes. So this is six full 7-minute vape sessions. Although in actual use a 1/2 full vial is done in 5 minutes -- so 8 sessions per charge.

This has been a good week.

Does the temp sensor A/D have good enough resolution to give you the accuracy you're looking for?

In the analog domain, your basic PID controller is considered an excellent way to control things with lag times -- like temperature.

Manufacturer
Yes, the MAX6675 provides 12 bits of resolution over a range of 0C to 1023C -- so 1/4C per bit. At least thats the descrimination - the accuracy i'm not so sure. But i don't care so much about accuracy as repeatability - and the spec sheet doesn't say.

in going for an adaptive PID technique rather than the classic (as i understand it) PID. The classic PID is agnostic as to the actual physical "plant", requiring "tuning" of the three coefficients. The math for this system can be completely characterized -- maybe with a table lookup for the dutycycle valve based on the actual error.

But i need to get the PWM working in a region with more range for dutycycle value. If you get my drift.

Best get that pwm somewhere in the 50% range when maintaining temp.

Manufacturer
yes, i think that would be ideal.

plus or minus, of course.
V

I want to congratulate you on the innovations and progress you are making.

Can you post pictures and/or explain how the vape is actually used? The heater looks great. But how does vapor get from the bottom of the heated test tube within the heater to the user's lips/mouth? Do you envision different inhalation interfaces/equipment (tips, whips, tubing, etc.), such as for stealth/outdoor and desktop use?

Manufacturer
Thank-you. Here is a diagram of the airflow: 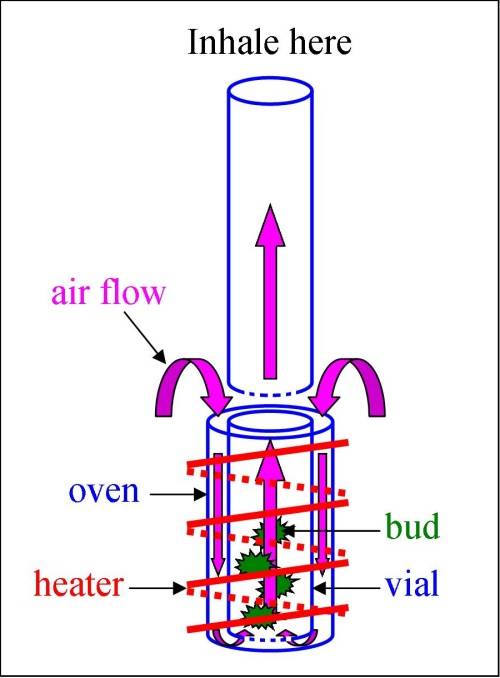 Does that explain it?

Here's a pix of the actual glassware: 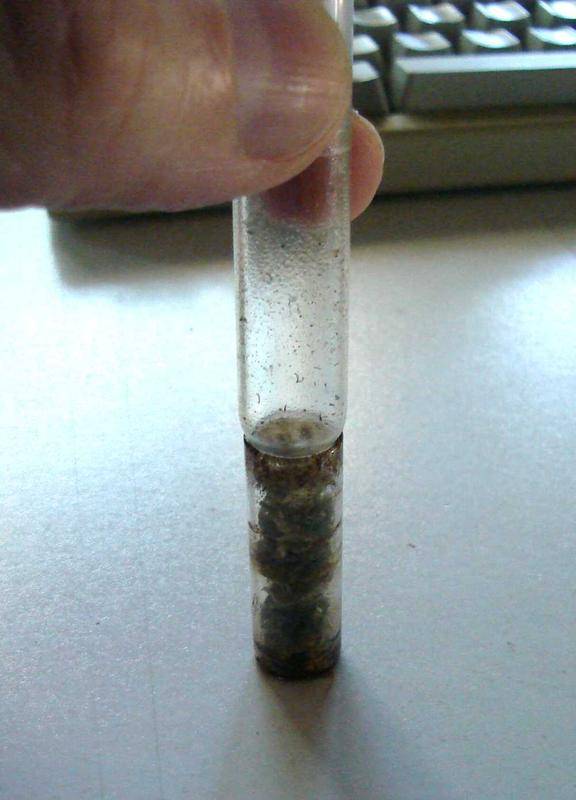 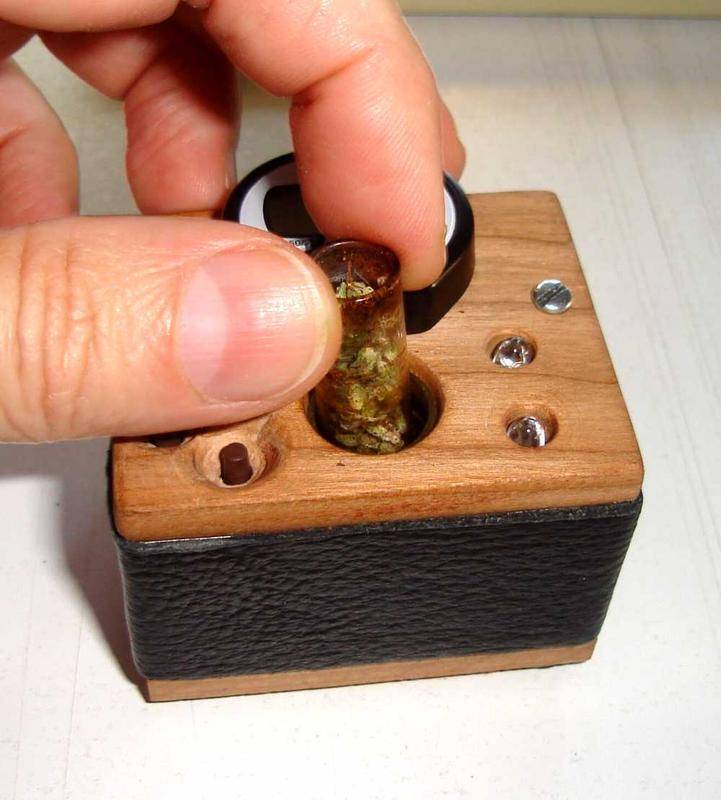 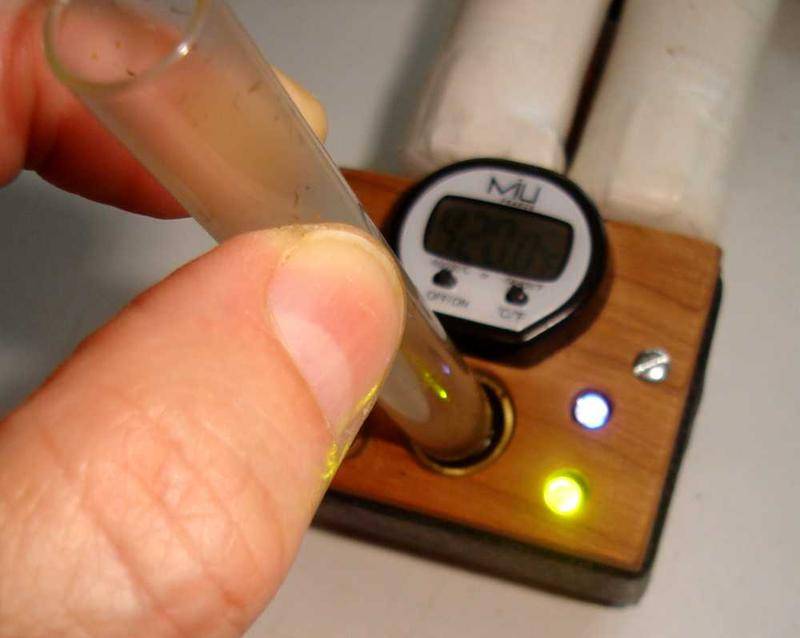 Looking at some vapor: 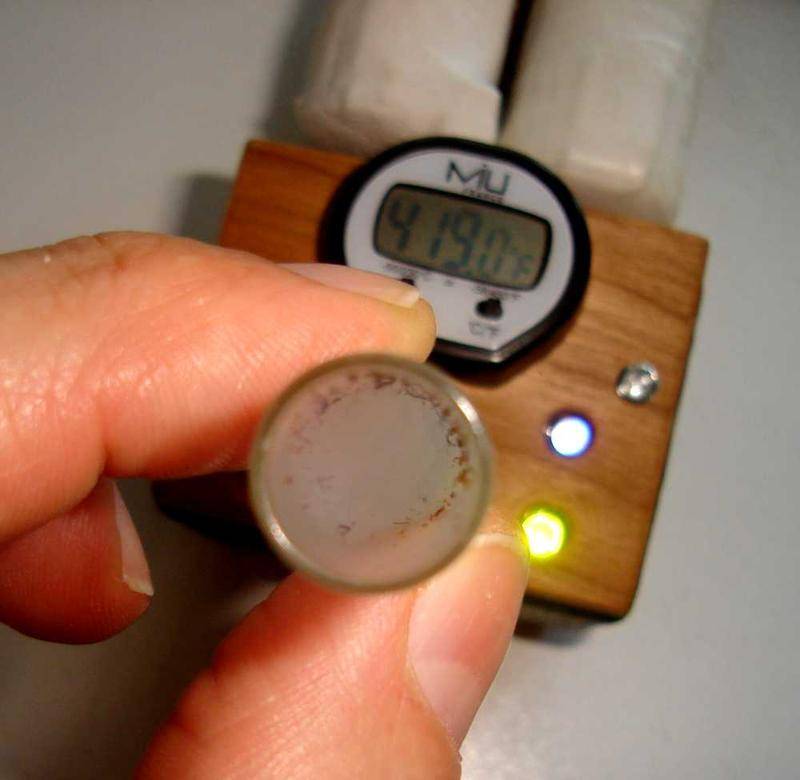 No plans for other inhalation devices - just a nice box to hold the works.

I took some crappy vids of my vape in action.


Here is the steady state oscilations of the controller
http://img46.imageshack.us/img46/8702/video9272.mp4

For me there is some lag between the vape "heating up" and when it becomes hittable. I treid insterting the bowl first, but it may just be the low setpoint. In the vids, the vape was set to 200c which is approx 400F. Assuming similar heat losses to what you've seen I would want it slightly higher than that. I'm still not sure what the best balance between quick vapor and smoothness of the hits.

Manufacturer
can't view mp4 for some reason. can you put it on YouTube?

my theory about the lag is the trichomes need some time in the heat to melt and expose the THC juice inside. Then the hot air can vaporize it. This takes about 60 seconds.

since i can't view the oscillations of the controller, how much wobble are you getting? i think i figured out the problem on my wobble ... the pwm period is too short. Since the temperature is only sampled 3 times a second, the pwm period should be about 3 Hz also. Unfortunately, the minimum period that can be set is 250 Hz. i've got an approach i hope to try today that should fix it.

Really? The vids work fine for me. In the video the setpoint is 200, the max it reaches is 201.25 and minimum is 199.50, but mostly it stays between 200 and 201. I could probably fine tune better, but I got a bunch of stuff going on a school, so I'll probably wait until I have a 2nd prototype to do too much tinkering.

I'm really not sure what you mean by the pwm stuff. My pwm runs at 10khz. I don't think that matters at all. Do you mean the frequency at which you are changing the pwm duty cycle? In mine I do a PID calc each time I measure temp (4hz) and change the pwm duty cycle.

Lol @ thc juice. I tasted a little droplet from a broken tube. It was super fresh/minty weed flavor. Dankness. I think one of the main advantages of vaping with this type of glassware is the ease in harvesting the vapor oil.

Manufacturer
Winamp tries to play the mp4, but the screen is blank.

My PWM is running at 1Khz and i also only change the dutycycle value after a temperature reading. But when i look at the dutycycle value being used (and adjusted/calculated by the algorithm), the value is between 1 and 4. Somehow that seems wrong to me. So the algorithm mainly does bang-bang -- that is, setting the value at either max (1023) or zero. And that results in a 10F swing.

The 1 degree is in celcius though, so its really 2.2F.

I'm not sure what values it usually puts out, but I would probably guess it turns on about 1/4 to 1/5 of total power.

Bubar said:
I'm not sure what values it usually puts out, but I would probably guess it turns on about 1/4 to 1/5 of total power.
Click to expand...

Sheesh. Don't any of you coders own an oscilloscope? This is like painting in the dark.

Manufacturer
Yes i have it set to 10 bits -- for no good reason, just thought maximum possible resolution would be "better". i just thought of another test setup while i was brushing my teeth after dinner that i want to try.

Rocket, to this coder, hardware is only theoretical ... i haven't touched an oscilliscope in more than 25 years, although i've been tempted (recently) to get a USB model to check the MOSFET performance.

I do infact use an oscilloscope. Way better idea though, is output duty cycle to screen. I don't have time right now.
And try a different browser if the vids don't work. Works fine in chrome.

Ordered some Blue Lipo batteries. They aren't the nice LiFePO4 like the A123's but they cost about half as much. I got a 7.4V 3300mAh for long hauls and a 1300mAh for quick sessions. I hope to set up a dock that the vape can sit in at home and charge the battery.

Aside from safety, the other advantages of the LiFePo4 batteries (such as A123Systems) is faster recharge (15 minutes) and more recharge cycles (1000s) before the batteries degrade.

From Wikipedia (my god):

The voltage of a Li-poly cell varies from about 2.7 V (discharged) to about 4.23 V (fully charged), and Li-poly cells have to be protected from overcharge by limiting the applied voltage to no more than 4.235 V per cell used in a series combination. Overcharging a Li-poly battery will likely result in explosion and/or fire. During discharge on load, the load has to be removed as soon as the voltage drops below approximately 3.0 V per cell (used in a series combination), or else the battery will subsequently no longer accept a full charge and may experience problems holding voltage under load.
Click to expand...

so don't scrimp on the charger. and set your voltage regulator dropout appropriately.

Now, think about selling that as a commercial product ... how does $500 per unit sound now?

Lots of people have no problem dropping $500 on a bong, and then dropping it ... crash.

Does your voltage regulator fail stopping further discharge before it reaches the critical point, or do you just monitor the battery voltage yourself?

Manufacturer
The vreg drops out before the batteries get below 2.5v, which is their end of charge ... the blue LED goes out - at which point i unplug the Bud Toaster.

i finally made some progress toward PID temperture control. i am getting +/- 1F control, and then it goes nuts and cruises up and down about 10F before settling on 1F accuracy again. The coefficients (dividing by powers of 2) are very touchy. i'm still trying to develop some intuition about wtf is going on to be able to set the factors more intelligently.

we had a little snow and that has caused some interruption with my normal routine here in the digital bunker -- kept me off line for about 48 hrs. so i screwed around with my wireless router and now that isn't working right. oh bother.

I wish there was a good tool for scraping down the insides of the vapor tube. Some vapor condensate gets trapped above where it gets hot if I just try to stick the tube straight into the vape. Right now to get rid of it I just use a lighter and hit it like a crack pipe.

Manufacturer
That stuff collects at the bottom of the tube i use for the whip. i just stick it into the oven tube and hit it - but it doesn't do much. better and easier to just swab it out with a rolled up piece of paper towel. Sometimes i shake some iso in the tube to clean it.

For me the vapor residue goes up about 2/3'rds of the tube, but I use the small diameter tube.

With paper towels you can't get stoned. I guess a long thin knife would be pretty much the best thing. I tried using my bowl grabbing tweezers, but that just gets oily vapor residue all over anything it touches.

Hopefully the UPS gods will get me my diamond drill bits today and I'll be able to make a big tube like you use.

My question about the vreg was whether it safely cut out before the minimum charge where you wouldn't be able to recharge it.

Manufacturer
glass drilling tip: make a template with the hole pattern in some thin foil - I use copper foil from a hobby shop - and wrap that around the end of the tube. Otherwise, the bit will slip and snap and at several $ each, that gets expensive.

Also, fill the tube with water and hold the piece under water while drilling. i can drill several dozen holes before the bit is toast. i use a dremel tool running about 15,000 rpm. i have a "drill press" dremel accessory to hold the dremel and make sure the motion is vertical up/down.

So far the vreg has been good to me - batteries have not been damaged.

mastermind behind the great Vapor Caper