this is a repost from r/cannabis extracts that I think needs to be shared throughout the community.

Apparently there is a way to test silicone to see which are actually "platinum cured" and which are full of BULLSHIT.
post below: (copied from reddit) Original post here

A few posters on this sub have raised the issue...they get called trolls, or are accused of working for Oil Slick (because Oil Slick wont use fda grade silicone). I spent the past few hours researching the FACTS and here are my findings...with links.

First of all, this isnt just an issue with Concentrate containers. "bloom" and other smells/flavors from FDA food grade silicone have been a topic of discussion since silicone bakeware hit the culinary scene 8-9 years ago. Lots of articles, lots of data and a very simple test are readily available to anyone willing to do the research.

[this article](http://foodbabe.com/2013/10/22/sillyputty/) discusses the various preservatives and fillers ALLOWED BY THE FDA to be inside food grade silicone. they include Formaldehyde, which albertamafeuse mentions on another thread in this sub ...before he/she is attacked as a "troll"
The article continues on to cover how the FDA actually allows dimethylpentasiloxane to be added to OUR FOOD AND DRINK. And how those practices are not legal in Europe.

As a matter of fact FDA silicone is not allowed in the EU at all. The European standard is called LFGB and allows for no fillers of any kind.

Detailing the simple test to see if there are cheap fillers added to silicone.
quote:
>The better silicone products cost more than the glass or metal ones they replace. Some of them are worth it. But beware: not all silicone is created equal. To reduce costs, some manufacturers add fillers to the product. Luckily there is a simple way to tell: pinch and twist a flat surface on the item. If white shows through, the product contains filler. Pure silicone does not change color when twisted.

I feel like an asshole because I only buy "platinum cured" but have been taking their word for it.
Only the Oil Slick stays the same no matter how hard you pull/twist /pinch. Gotta assume they are the only ones telling the truth.

the nogoo was the absolute WORST you dont even need to push before you see the white appear.
GRAB YOUR CONTAINERS AND TRY IT.

Finally, when I spoke with Oil Slick about this issue (they patched me through to a materials engineer that works there) he mentioned the "bloom" issue. This is the dust that comes out onto the surface of the silicone. [heres a picture of Bloom on an ice cube tray](http://imgur.com/AlHo7yJ)

and [here is an article by Dow Chemichal](http://www.dowcorning.com/content/publishedlit/52-1077-01.pdf)
that discussed in depth the differences between Peroxide cured and Platinum cured Silicone.

Its a long one so heres a few takeaways:
Quote:
>As mentioned above, residuals in peroxide-cured
elastomers and tubing translate into potential
extractables which are not present in platinum-catalyzed materials.

So there you have it.
1)Platinum cured silicone=NO EXTRACTABLES OR FILLERS
2)Fillers for silicone include some terrible shit
and
3)there is an easy test to see if there are fillers....and not all the companies saying they are platinum cured...are telling the truth.

I saw the thread on Redditt and confused if the danger exists for short term storage (I.e. Days, weeks etc) or if the danger is there for longer than a few weeks?

my understanding from reading the dupont link is that fillers/bloom/extractables are a main ingredient of low grades of silicone.
I know that if they are still in the package a shitty silicone jar will still smell like chemicals for a very long time. beyond that, not a clue how dangerous or how long. prefer not to find out, ill just do the test on anything i use.
G

So if my silicone containers are made with a lot of filler I should just toss them?
I didn't try the test but my containers get covered in a white substance every time I put concentrates in them so I stopped using them already.

My no goo containers shows no white no matter how hard I twist or pinch. Maybe they've changed?

Accessory Maker
The ones I have (from ebay, probably China) do not smell funny. They don't leave any residue. BUT. The color lightens to nearly white when thin parts are pinched.
T

Maybe they don't. the ones that have white with a color swirled do seem to show a white through it when pinched, this may be the white coloring though. The ones that are dark colors when pinched and twisted very hard seemed to show white but on further inspection it seems the silicon is being stretched very thin and light is shinning through and that is what appears as white. So still using the slick stacks for now.

so when you twist the silicone... does the surface turn white? or do you see white bits inside the silicone?

are there pics of what to look for? id like to see/hear more about this.

really sucks that some of these companies are just lying through their teeth.

*EDIT*. here is a video of the test in action. if it was posted already and i missed it my apologies.

alltoreup said:
My no goo containers shows no white no matter how hard I twist or pinch. Maybe they've changed?
Click to expand...

Apparently I just didn't twist in the right place. Take the lid of your container and bend the edge outwards. There's the white. It goes away when you release but it's there on my no goo, the freebies from ebay, the round blue one from dr dabber and a free one from vapexhale. So yeah. Every one that I have.

Accessory Maker
I got a couple of Slick Stacks and they do not pinch white.
That's 7g of Larry's Cherries. 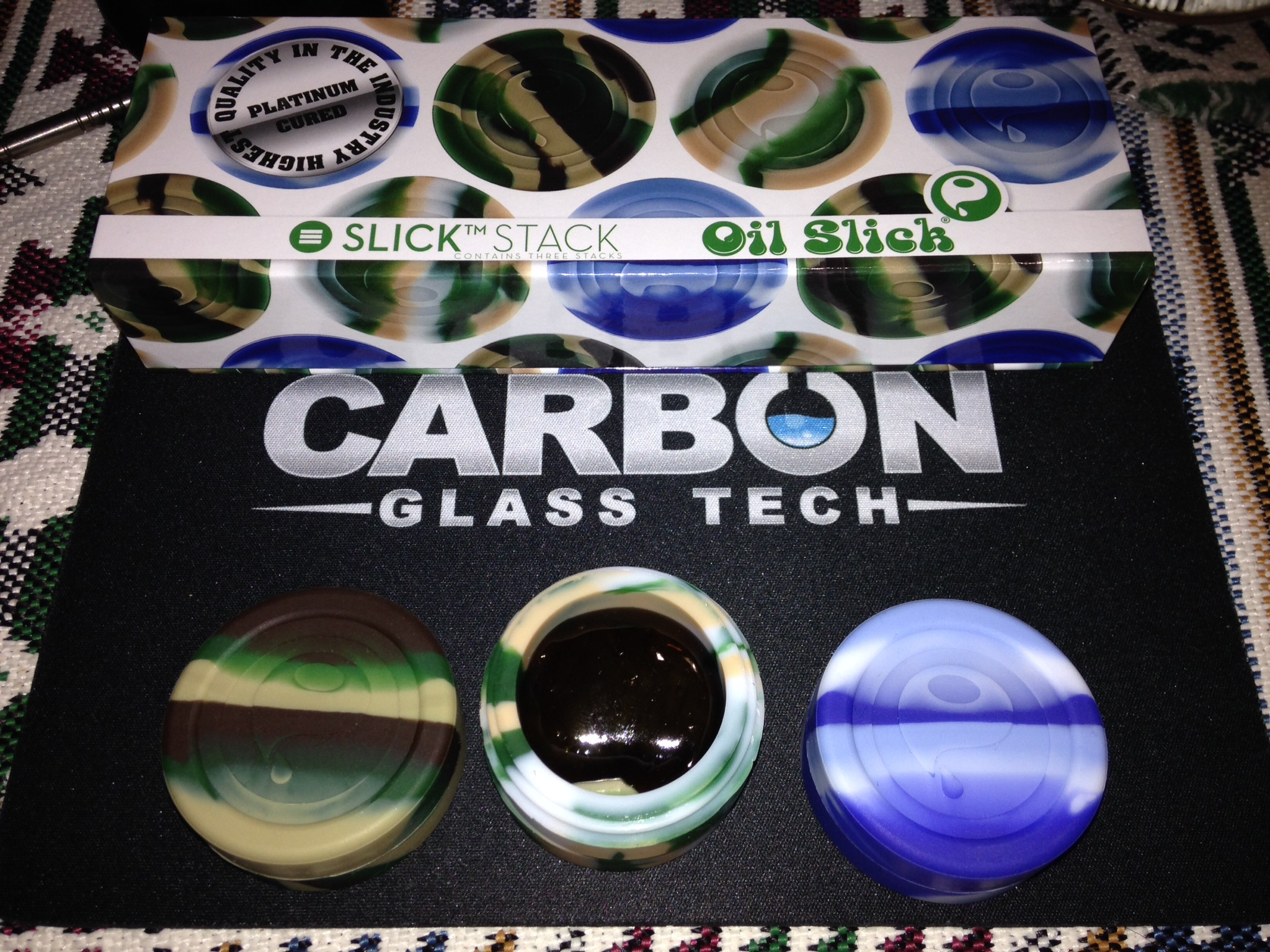 i wonder why this only is an issue with the containers and not the pads and dishes...? its the same material is it not?

actually the contrary is true. since finding this article, Ive been pinching/bending every type of silicone i come across.
Kitchen stuff mainly, baking pan, cake molds, spatula...and a few of the containers I have around the house.

Other than my Oil Slicks, ALL of the items i have tried this on have shown fillers inside. Next time you are at the grocery store....GO WILD IN THE BAKING AISLE hahaha.

real question is ...how is this ok with the FDA?
F

wouldnt the pigment be filler?

Therefore if its colored it got a filler in it... so... unless its virgin white platinum cured.... bla bla bla... marketing!

the fda is PAID to regulate things...

who pays them?
the people submitting products for testing.

also the mats do not bend and strech in the same manner cause they are also filled with fiberglass to prevent such flexing extremes... but everyone freaks out about exposed fiberglass too.


so what about parchment... has anyone even concidered that?

how do you distinguish the test on a pure white piece of silicone?

or silicone sprayed on paper?


marketing... one day we are buying the next miracle enhancer... the next were consuming toxic chemicals from it.
Last edited: Oct 29, 2014

ganjapharma said:
real question is ...how is this ok with the FDA?
Click to expand...

Shouldn't the question be "is there actually a safety issue here"? I see a lot of posts a out pinching and white spots and what not but I didn't see anything showing that this is an issue. Did I miss it?

Caligula said:
Shouldn't the question be "is there actually a safety issue here"? I see a lot of posts a out pinching and white spots and what not but I didn't see anything showing that this is an issue. Did I miss it?
Click to expand...

I saw one comment, (I believe on Reddit) where a guy's extract actually sucked up the blue dye from his container when he went to higher altitude with it.

But yeah you do raise a valid point in that it's not a observable known threat.

It's like $5 to replace my container. I also noticed that some of my cheap containers were defiantly not truly non-stick and were building up some residue over time, that alone made me want to replace them.

So far the only container I have that passes the pinch test is Oil slick.
Nosticky container (AKA dab reaper) claimed to be platinum cured, feels powdery to the touch like other plat. but fails the pinch test, won't be using them.

Some other household silicone things I have I also pinch tested, and the one platinum item I do have actually passed the pinch test.

Was that blue dye incident actually documented or is this just an anecdotal post from a random reddit user?

"Taken fully purged shatter on a trip to Alaska in some nogoo containers and when I got back I took out what was left in the containers and they all had a color transfer. Clear one was white on the bottom and the green/blue ones had their matching color on the bottom of the oil. Never happened with my oil slick ones. Not exactly scientific, but I don't use off brand ones anymore if I can help it.
Also, aqualab's 420 and 710 sales make oil slick stuff pretty affordable, so I stock up." -/u/switchy85

I asked someone from the nogoo team to check out that thread and see if they may have any insight or might see it being worthy of discussing, but I got no reply back ..

I would like to believe they are just busy over careless, but now days cash rules everything ; they are pretty much the same people that brought out the Kannastor grinders

"Taken fully purged shatter on a trip to Alaska in some nogoo containers and when I got back I took out what was left in the containers and they all had a color transfer. Clear one was white on the bottom and the green/blue ones had their matching color on the bottom of the oil. Never happened with my oil slick ones. Not exactly scientific, but I don't use off brand ones anymore if I can help it.
Also, aqualab's 420 and 710 sales make oil slick stuff pretty affordable, so I stock up." -/u/switchy85
Click to expand...

While i understand that this is simply an undocumented reddit post (with the OP even saying that his conclusion "isn't very scientific"), I don't see what this has to do with "platinum curing" things or FDA approved silicone in general...

Regardless, this is the only time I've even heard of something like this happening. I would be inclined to think that if it was a general issue with silicone instead of one set of cheap no-name containers, we would have heard about it from one of the tens of thousands of people who have been using thsee types of products over the past few years.

BTW I see he took a trip to Alaska but I see no mention of "altitude" being a cause of this, as previously suggested in this thread. Did I miss that ?
Last edited: Oct 30, 2014
You must log in or register to reply here.
Share:
Share Link
Top Bottom