Manufacturer
Thanks fuckcombustion.com for providing a place to hide out and take and idea into its best possible incarnation with a group of close friends. The exert input early in the design process enabled the rapid evolution of the RBT technology and that spirit of customer involvement still exists today. Many thanks and much respect to both the old and new staff especially those two old salty dogs Pak and Stu for making this bold move to keep the community alive in a new and improved way.

Wow Mi1 Mi2 Mi3… what a blur! The Milaana removed the electronics from Zion and tuned the heater to perform as un unregulated device. Milaana was a progression from a rough prototype in the Mi1 to a refined product in the Mi3. For now, the Milaana design progression will end with Mi3 as RBT will table the 19 mm designs with the new designs on the way (Seed, ZapCap, ZipZap…)

Please stay positive on the RBT threads and address any business related concerns to ryan@rastabuddhatao.com as this thread is for sharing user experiences and will not be used to address customer service issues. Please learn the rules and follow them and help make the moderators job easy. These people give their own valuable time out of love for this community and their job CAN be very time consuming. They deserve for us all to act with love and respect and be on our best behavior as payment for giving us this gift of fcombustion.com.

This is so great. I love this! I’m getting fired up for NewFC. Love to the RBT family.

Manufacturer
Ah thanks for stopping by with the positive vibe @thestrayfox ... Im really jazzed as well.

So exciting to have you as the first vaporizers listed on new FC! Fitting legacy for Zion and Milaana, which quite frankly completely changed the game for portable convection vaporizers!

I love my Milaana. 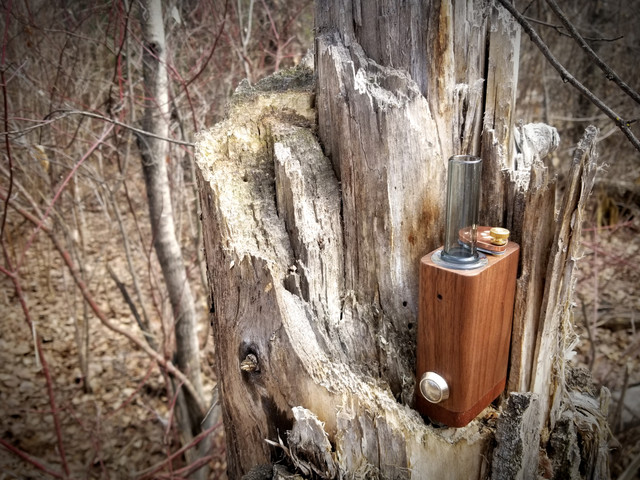 I posted this picture before in the old thread I think. I can't say for sure, I've been hitting my Milaana 2 and 3 all day so I'm a little blasted

. I guess what I'm saying is that I fucking love the Milaana and thank you Ryan for making wicked vapes!

Thanks Ryan - still loving my Mi3!!

Manufacturer
Great to see such support here! Excited to get the Mi3's up for sale early next week

Here's my entry....not sure if its a tech tip, or wood porn....depends on how you look at it I guess

My wife has a button just like that...It works , but I gotta push it juuussst right

.
I'll show myself out

Ah that problem I cannot help with... rumor has it that it is experienced by most models with the root cause being an erratic control system... and I am out!

IG told me to do it.

I have a new technique using the Mi2 through water and boyyyyyy is it fuckin gnarly.

Basically I preheat 3 seconds or so as normal, and instead of jumping right into thick clouds, I ride the medium temp for a good while. The vapor consistently pours in. Middle of the hit I hold the button down full throttle and don't let off of it. I do this for a few seconds before totally ramping up my draw rate. Because the temp was rising during those few seconds of holding it down without pulsing, the increased drawrate quickly catches up and levels it out while bringing in just ridiculous amounts of vapor very very quickly.
Click to expand...

Resinrider said:
Here's my entry....not sure if its a tech tip, or wood porn....depends on how you look at it I guess

Ah that problem I cannot help with... rumor has it that it is experienced by most models with the root cause being an erratic control system... and I am out!
Click to expand...

Hah ha... I remember that one. I guess this one counts as both. Thanks so much for digging out this gem. Gonna be so nice to take this opportunity to pause and look back.

Let's see if I can do this right

Big things start with small seeds so please be bring the right amount of organic food and leave the BS for the other threads.
Click to expand...

Keep on innovating guys! I'll be keeping an eye on this ones progress. Good job.
Click to expand...

Seems like a pretty good sentiment to bring round, right at the beginning of a new thread. Cheers for coming this far and keeping on going, @Rastabuddhatao

Here is my entry

when I replaced my defective switch, small button milaana

My switch also failed , got a replacement on the way , but in the meantime 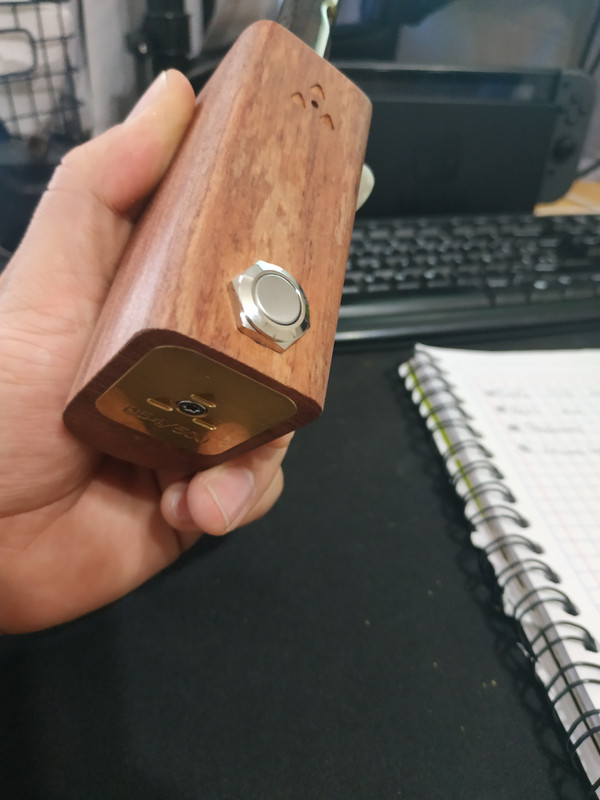 Here is my entry ... I didn't make the original post, but I like the way these XL8Rs are being loved and total agree with him. Orginally posted by Bossman

I dislike the glass honeycomb screens because they clog too quickly and make the already bad draw resistance of Arizer portables worse. The basket screens paired with the XL8R cooling stems are the best combination I've found for easy maintenance and consistent performance. I pop the screen out and clean it with a torch occasionally just holding it with a pair of tweezers. Good for making stem milk too. I use almond milk so I add organic coconut oil to up the fat content and get the stems cleaner. That's what's separated out in the shotglass pic just FYI. 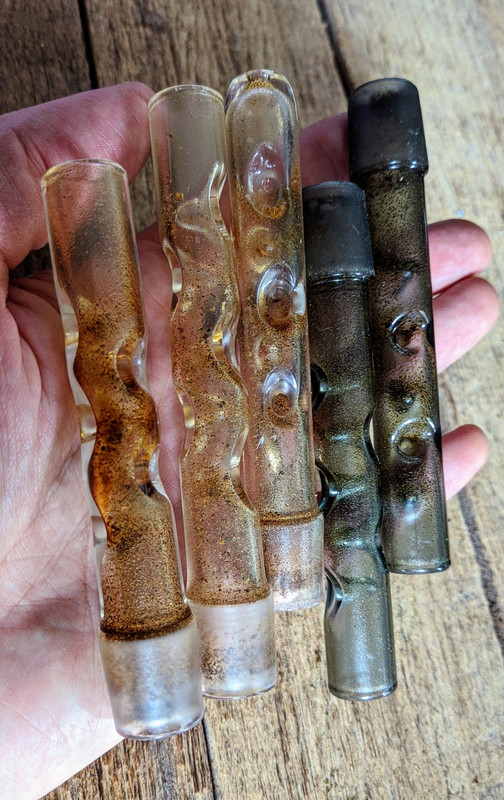 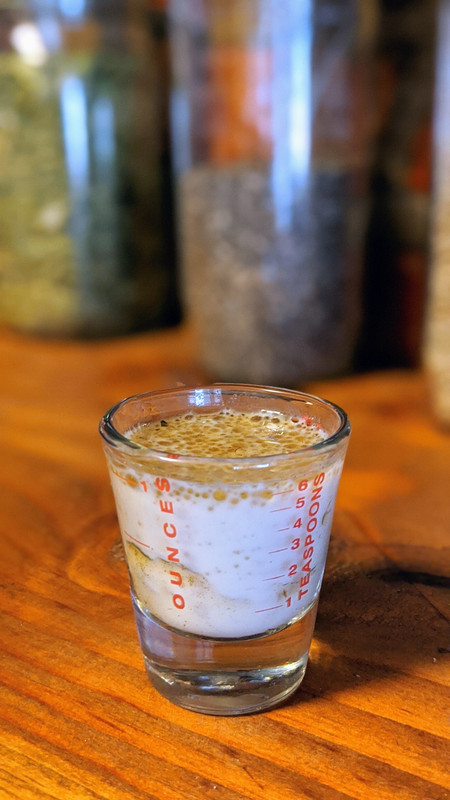 Okay that is a stunner, but check out some of these other spalted wonders:

https://imgur.com/NFNr9CS
Not to mention the other exotics like this bloodwood of @Duff's

And there was a real stunner of a canarywood that I believe @vapen00b has, but I could not see the pic on old FC so maybe he will be nice enough to grace us with a new photo?!

From around the same time as when I got this purpleheart (these were all technically MilaanaV2, the most polished version of the original Milaana1, finally available in exotic woods with logo copper and picks)

Here it is with my early MilaanaV1 (these were the first finalized product, after the MilaanaOG, which was the initial pre-order without the intake screen or any recessed glass and a slower heater--I never had one from that run, instead I had the first official beta used by RBT himself, then I got this rough early V1 to replace it and it always ran hot n fast maybe similar to Mi3 which j do not have yet... Anyway the V1's that followed had rolling upgrades through every production run leading into the V2's, which were even more polished and began to include the pick and other woods instead of just maple... A few of these exotic customs were specially tuned for their owners as well)

(custom wood stems made by Alan of ToastyTop/HI/IH, dark walnut and canarywood)

RBT's craft kept getting better and better with each build, the woodwork on the exotics and splinters is quite beautiful really... I also miss the days of RBT's own customized glass stems (even pre xl8r)

I did a more comprehensive post of my four Milaana's once I got my Mi2 (walnut with Sapele bottom cap-- Milaana2 changes included new air intake in the front, rectangular shape, standardized exotics, larger contrasting bottom cap, new nice logo copper, thick German clear glass... I guess I should mention that the Milaana3 then now is mass-produced in China with several build changes like new ceramic and brass parts, 19/19 glass, and no bottom cap) so maybe I will find and repost those photos here as well... There is so much of course!

I'll leave off with a couple early videos that are nice to have on a first page:

Accessory Maker
My God those are beautiful!!! Hold on, let me wipe the drool up!

This was the day my Mi3 showed up, in the same box, with a Splinter V2 I won on an Live feed. What a feeling.

The Milaana has been my every day OTG since I bought a Mi1 originally owned and shaped by @Khelek41girl (feels soooo good). And now I have a 3 to add to the mix, as well as a beautiful bocote pick from @unklmark. Needless to say I'm a fan, both of this vape, and the remarkable craftsmanship of this community. Cheers all around!

I’m gonna try this.
I'm excited to finally get ahead of this thing and finally take care of all those that got me here!
Its gonna be rocky for the next month or so but we will all get through it if we work together.
G

When I turn my vape upside down it sounds like there is a small screw or something lying around loosely around and flying back and forth while turning. is that normal i asked the seller. :/ but everything works fine.

Edit:
I removed the battery and saw a thick down there I assume dried glue residue that flew back and forth in the whole vape when tunrning it. i could remove it.