I definitely judged it a little from the pics, but I'm kind of into it. The bowl looks ceramic, I don't think I heard anyone say that in the videos though. Also wondering what the airpath looks like and is made of and how cleaning works. Other than that sounds good. Quick heat up time is nice. I'm not sure if I would call it portable, semi-portable maybe? I could see it being great in certain situations.

Interesting concept. Hope they refine the tube design. Doesn't look like something I'd want to hit.

Far from portable. Maybe portable to folks in legal states.

Puffco is rocking a ceramic cup in their Plus model so I would imagine this is just a bigger version. The Plus was my go to pen when I would use a pen. The only reason I really ever moved on was because I wanted to be able to do larger doses and airflow was restricted some. I really liked it though and thought it was the best when I used it. I even tried to create bigger versions of it until Source came out with their XXL nails.

Since I am out of the pen game and moved on to carts this really does not appeal to that niche for me nor could it at its current size as @Danksta mentioned. It would fill in a possible niche for me and that is my travel bong. I don't take my enail with me on trips so it would be nice to have a big hitter. Currently I rely on the Source XXL nails but I kinda like this more for several reasons. The water piece is shaped the way it is to cool your hit and retain as much flavor still with the vortex action cooling and the shape allowing for larger bubbles and I think it would be prefered over the typical bubbler attacments for the Source and other portable dab rigs like the Dabado Bolt and the likes. Being able to press the button once and then let it heat up is much better than holding a button down the entire time which frees up a hand. No stupid temp protection is needed since its calibrated to set temps so I wont see temp protection killing my hit.

Now there is one manor advantage this device has over enails for me that could get me to use it more around the house than my enail and that is that the bowl and heater are not exposed from what I can tell. I have always hated that I have an exposed hot coil and nail when my enail is on especially with 3 kids at 7 and under running around the place. That and the portability factor would be huge for me around my house. Now if I could only get the bowl dimensions to find out if the Source XXL SiC dish would fit inside of it! Or perhaps a teardown and replace with the SiC bucket! I wonder how much this thing is gonna cost?

I seriously do not mean this as a diss but I'd love one for the bathroom.

It would go well with water picks and other dental tools some people have on the counter. It would blend in in that environment.

No sepcs so far it seems.
Curious about this thing but my hopes are not very 'high'....

DJ Colonel Corn said:
No sepcs so far it seems.
Curious about this thing but my hopes are not very 'high'....
Click to expand...

why? Puffco definitely stepped their game up since the first model and the unit looks quality from the ceramic nail to the glass and I'm sure by now they wouldn't release something without vigorous testing. It looks like it will solve some of my dab problems and no I don't work for them haha

I thought this was an interesting follow up article about the difficulty in demoing cannabis related products at CES:

The challenge of showcasing weed tech at CES

Thanks for sharing @GreenHopper.
That Vapium product is also really interesting (albeit off topic).
T

This looks pretty cool...Think it'll take some playing time away from the vapexhale cloud evo? The evo dethroned my volcano and I loved my volcano.

At a price tag of $350 I am not so sure I am still interested. If it was a replaceable SiC dish and digital temp I would probably drop $350 even if money was tight, but $350 for 4 temps and ceramic dish is too much for me. I already have moved past ceramic in all my vaporizers and onto SiC and sometimes quartz if SiC is not available. I was excited to try this thinking Puffco would keep it down in the $100-$150 range and was considering trying ceramic again. I mean the Puffco Plus ceramic cup was very flavorful for a week or two...a month or two if swabbed regularly and never overfilled, but its not good enough for me to drop 3x as much for an enlarged version that includes water filtration. I still want to try it...maybe if Puffco drops the price and has a huge sale...4th of July?

Just in case anyone was wondering. The device uses an atomizer and the atomizer is user replaceable!

I'm just wondering if the ceramic bowl is torch-able or replaceable. I have gone through countless plus carts because they are impossible to clean. If the bowl can be cleaned or replaced, I will probably have to buy one for those times when I can't use my nice glass. 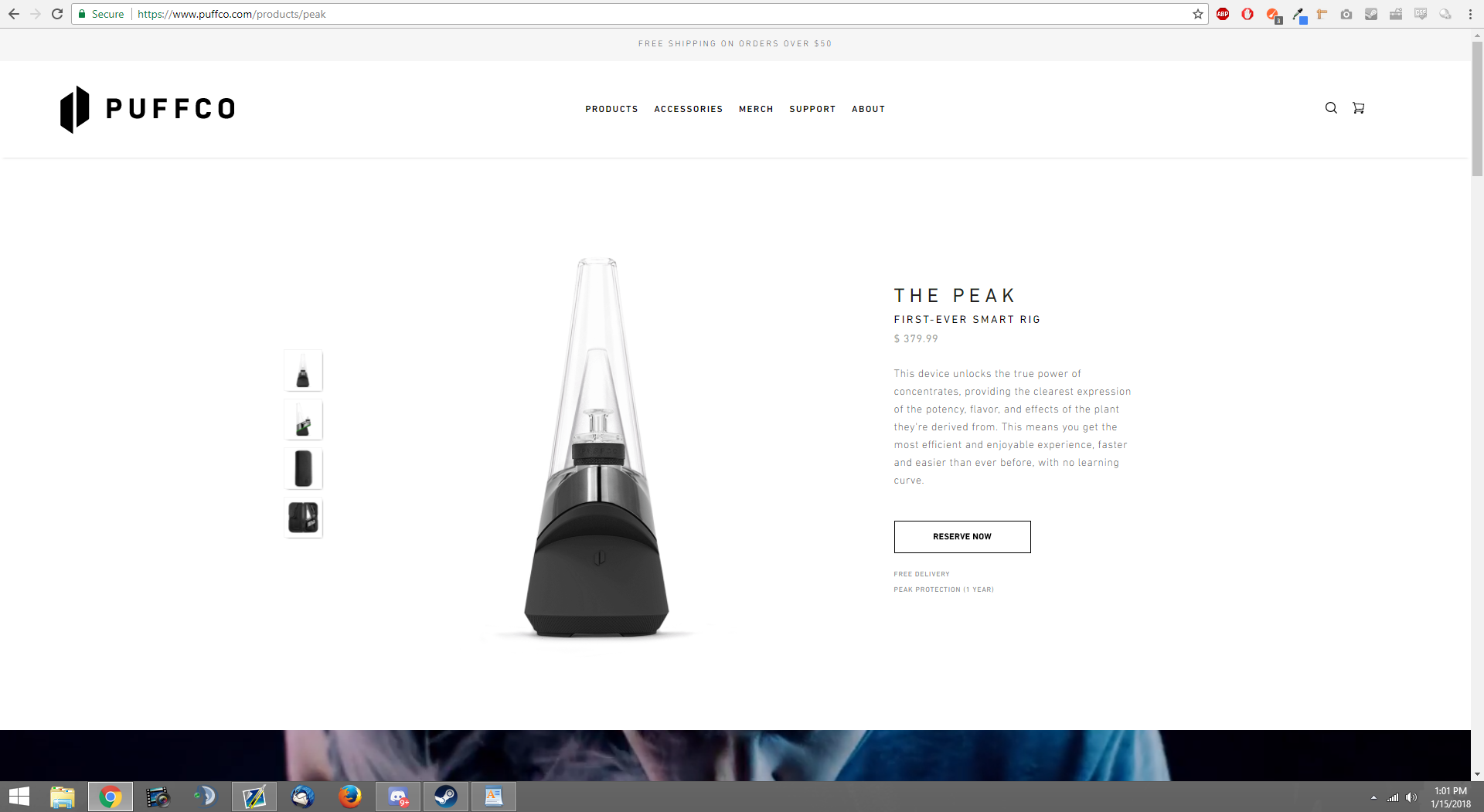 379.99
Where is the do not like button when you need it.
I would go as far as to say fucking freaking expnsive.

If it does what it's supposed to do properly then I have no problem putting down the money. But I need to be convinced and see some good evidence first.

Preordered mine at 1:02ish lol

clukx said:
I'm very very excited for this I will be getting it forsure
Click to expand...

clukx said:
Preordered mine at 1:02ish lol
Click to expand...

I thought you would!!

Thanks so much for taking one for the team! I am so excited to hear your thoughts!

lookhigh said:
379.99
Where is the do not like button when you need it.
I would go as far as to say fucking freaking expensive.
Click to expand...

CONAIR, SUNBEAM, NORELCO and other corporate giant's will make them more inline with BLOW dryer's!

Maybe the Peak will be the "Dyson" of the handheld concentrate device world?!

biohacker said:
I thought you would!!

Thanks so much for taking one for the team! I am so excited to hear your thoughts!

my enailk and Dr dabber boost are my primary means of dabbing currently, the boost is too top heavy and small nail, the enail is too sketchy for the coffee table so hopefully the peak is perfect

Vapor path seems questionable to me with a high likelihood of silicone.

I would argue this is less of a social dab experience than a torched banger off of a heady tube.

Seems cool for my mom I guess, but she would never spend that kind of money and at this price I wouldn't pick alumina ceramic over a sapphire halo either.

I also pre-ordered. I have plenty of heady glass/thermals/bangers/enail gear/pens/carts/etc, but this still is attractive to me for stealth/travel reasons. The CEO has been putting out some live vids on IG, looks promising for sure.

biohacker said:
Maybe the Peak will be the "Dyson" of the handheld concentrate device world?!
Click to expand...

Ask a professional carpet cleaner or repair man...hype and sales don't lead to the best product. Most I know will still recommend a bag vacum cleaner over a Dyson or other cannister vacs.

Kinda how this Puffco thing is gonna play out. We'll hear how great it is, then see a rash of them for sale in the Classifieds section. WAAAAY Overpriced for what this is folks. What are the groundbreaking/innovative parts of this dealio?
You must log in or register to reply here.
Share:
Link
Top Bottom