This is a glass on glass add on for bongs for the vaporization of hash oil. 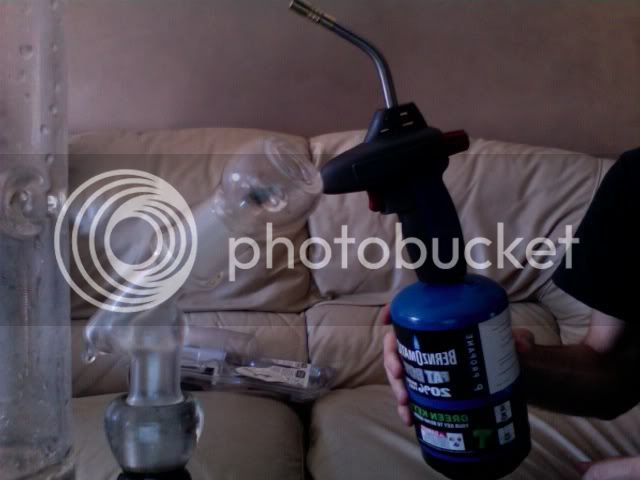 Use of such a diesel torch (not actually diesel lol, its propane oxygen) isn't recommended or even required, but eh, its me.

three peices, divited nail insert (what you see thats black with soot), globe, and female bong attatchment.
Heat the glass nail, drop the oil on it, simple as that.

I love hash oil, in my eyes it is far superior to pressed solids or anything for that matter; though of course I still think there is a place in my smoke kit for other hashes, but thats another bowl and vape technique thread, etc.

But that debate is neither here not there, so lets not go there please.

I was just curious to see what the FC reaction is to this device I have become so accustomed to using.
Suffice it to say, I no longer waste my oil consuming it in any other method. (still need to try tincture though).

I would LOVE to try this! My 1 concern w/your rig is there is no dead man's switch. I'd likely blaze the whole place one night on a a few drops of oil that made me go blotto.

I hear that, my lady is very caution about my use of it, and I won't lie its certainly hazardous, especially when considering is a device designed to get you impared at maximum efficiency, literally, and exposed fire and extreme heat is inherently involved in the process.

thanks for stopping by.

Have you hit a ti oil vape? I guess some say there's a huge difference between those and the glass nail style, and others say not so much. Do the nails ever crack from the repeated heating and cooling cycles?

they only crack if you make the propane flame too large. It must be kept the size of a torch lighter or a lil bigger. Any flame larger than that is just too hot for the glass nail head. Eventually it will force it to crack into shards if always used with hot direct heat

I've broke 1 8 dollar nail by dropping it, but it might have bounced had it not already been cracked by heat stress.

They changed their web page for me.

, all that stuff about not using an industiral torch. (actually now I see its even newer)
On my 3rd nail in as many months, no worse than buying screens if you ask me. Plus I like hemp lighter instead of bics, and aqlt sell both - So I'm there for other reasons as well and don't mind picking up an extra nail here and there - and I don't feel like getting a new torch or waiting a few seconds longer with a smaller flame.

This last nail has been used for about a month now and no fractures whatsoever. fingers crossed.

The results are in no way typical I'm told, just due to the fact that I like to use an overkill torch, again on their web site they reccomend using a chef's crem bru le torch which is butane powered and much less stressful for the glass, mine is propane/oxygen because I didn't know any better and I don't mind a hot flame or possible fracturing at the sake of slightly quicker heat times.

Never hit what I assume you are reffering to a titanium oil vape? with the hot ti strip that your drop the oil onto... seen em, but meh - look more inefficient to me. Much easier to drop oil into a hole in the center of a nail than to have it slide around on a hot plane of TI. But maybe its not that difficult again, never hit one if thats what you are talking about.

BUMP [since alot of people are asking how to vape hash, oils, wax, butter etc]

Which one of those would that be?: http://aqualabtechnologies.com/concentrate-utensils/vapor-globes.html

Accessory Maker
Uh-oh now that I know how to make oil from ABV, I guess I will have to buy one of those for my bubbler.

bho is good times, that guy in the video leaves his still going, tad bit wasteful.

spring for the TiNail and hopefully never have to replace it, i actually haven't tried any of the glass nails I have.

They say the TiPad retains heat better for the fattest dabs however, but has the most potential for burning yourself.

Tstat said:
Uh-oh now that I know how to make oil from ABV, I guess I will have to buy one of those for my bubbler.
Click to expand...

i would not use this with ABV oil...

Accessory Maker
OK, then... what would I use that oil for? Do you put hash in these types? Kief?

These are generally for honey oil and ABV oil definitely works.
Hash at least sort of works, probably the closer to full melt the better. The bong straws I keep plugging work a little better for regular hash.

Personally, I wasn't satisfied with the yield i got the couple time i tried with ABV.
Was also probably easily the crappiest oil ever.

Tstat wrote:
Uh-oh now that I know how to make oil from ABV, I guess I will have to buy one of those for my bubbler.
Click to expand...

just got my oil rig set up, all glass, i dont know any titanium blowers... ive made qwiso out of vaped buds a few times now, definitely had satisfactory (though not exceptional) results when mixing it with good herbs in the vapor bros, pulling it through water definitely helps with the taste. unfortunately, there is no oil scene where i live. there is no oil where i live at all. so when i got my new toy, i tried a dab of my ABV QWISO just to see how it worked. i do not think i will ever do it again. in my experience, the oil you get with abv qwiso isnt at all pure enough for dabbing. seems like no matter how well i filter it theres always some plant matter that gets through, and when i put it on the nail it left quite a bit of burned plant matter residue hardened onto my nail. judging by the harshness, id say i definitely got a fair mix of vapor and smoke as well. shit city.

has anyone had better results dabbing qwiso made from good buds? i assume it would be better that way, but ive found very little info on qwiso at all here, and what i did find was all for ABV. im obviously more reluctant to experiment with buds from which i have not yet gotten my money's worth, but id really like to try some good oil without having to go out west.

You can dab QWISO if its made right, and pure enough, but thats not as easy as BHO. The only QWISO I dab now is made from kief, and it seems to be fine.
S

not too many folks into concentrates around me either, but they like once they try it.

wtf848 said:
has anyone had better results dabbing qwiso made from good buds? i assume it would be better that way, but ive found very little info on qwiso at all here, and what i did find was all for ABV. im obviously more reluctant to experiment with buds from which i have not yet gotten my money's worth, but id really like to try some good oil without having to go out west.
Click to expand...

there is also a thread about water-curing your vape waste before making oil from it, but i can't find it at the moment.

I own both a skillet and oil dome. The oil dome is much preferred; way easier to dab and captures vapor more efficiently than a skillet curve. Although, the skillet curves with a cutout on the side (to facilitate dabbing) perform just as well as an oil dome IMO. I also haven't noticed any taste difference (titanium vs quartz) between the two. As for oil, high grade tastes amazing run through a clean piece. And I roll my dabs in grinder kief to add even more flavor.

vapor globes work great but it matters more for a vapor curve to be actually built right.

a shitty vapor curve is going to be really bad but its kind of hard to make a non-functioning globe.

if you want a quality curve, go for a HMK (hash master kut) curve, they had em on ALT not too long ago at under $100

They used to be available at AquaLab Technologies, but now are for sale on their own site.


mod note: Don't forget to include qualifiers like 'I think' or 'IMO' when comparing products. Do not state opinion as fact.

Might be worth adding that the judgment provided above is subjective.
N

i think curves are easier to reclaim. just heat them up and drip into a dish. you use the handle to manipulate it while it heats up. the globes almost need to iso'd in order to be reclaimed - not very easy to just heat up and drip out. now if you plan on mixing the reclaim with some abv qwiso then it doesn't matter that you used iso, but if you like a pure experience then gentle heat is the way to go, hence my preference for the curve.

This is an internet forum. Any judgment is subjective... unless backed by FACTS.

My statements are backed by FACT.

mod note: Sorry but your facts aren't enough on THIS internet forum.

just looked up the labworx skillets.

great price and even without it being a better quality metal/glass, the design itself (both the bell shape and the TI pad shape) looks like it works perfect.
do want!

This is an internet forum. Any judgment is subjective... unless backed by FACTS.

My statements are backed by FACT.

Check what the other manufacturers use.
Click to expand...

or you could know the truth, which is that Hashmasta Kut invented the ti pad. His are the best if you want a pad, not dome, get a Ti nail for the dome.

His are supposed to be specially shaped for easy reclaim and have nubs to hold a ti screen to help diffuse the vapor, they say you want the screen nubs.