I just saw the moon

Imgur: The magic of the Internet

Is a black hole that perfectly round? i know all of the images are enhanced since our human eyes can’t see properly, etc but that seems a little too touched up. But the outer parts surrounding the actual hole is mesmerizing.

Jill NYC said:
Is a black hole that perfectly round? i know all of the images are enhanced since our human eyes can’t see properly, etc but that seems a little too touched up. But the outer parts surrounding the actual hole is mesmerizing.
Click to expand...

I don't know for sure but I imagine viewing a black hole it would appear perfectly round to a degree seeing as it is infinitely dense....? I mean, but it's not really an object as we know one either, more like a region, so I don't think it's possible to view one as such...? Questions only lead to more questions with this stuff, all of which no one really knows anything about... so they call it "black" or "dark"... an absence of knowledge.


More info on NGC 1600 and this image and others here:

hubblesite.org
Here's a much higher res image from that site:

It may or may not "look" like the image. From the site, it even says it's a computer simulated image. There is an image of a black hole in this thread that I posted a while ago...it's the first and only of its kind as far as I know.

If you really want some brain scrambling go to Wikipedia and look up Black Holes
Wikipedia-Black Holes
And that's wikipedia...imagine if you went to a high-end theoretical physics meeting with the top scientists in the field...after their first sentence I'd be like HUH?, lol. 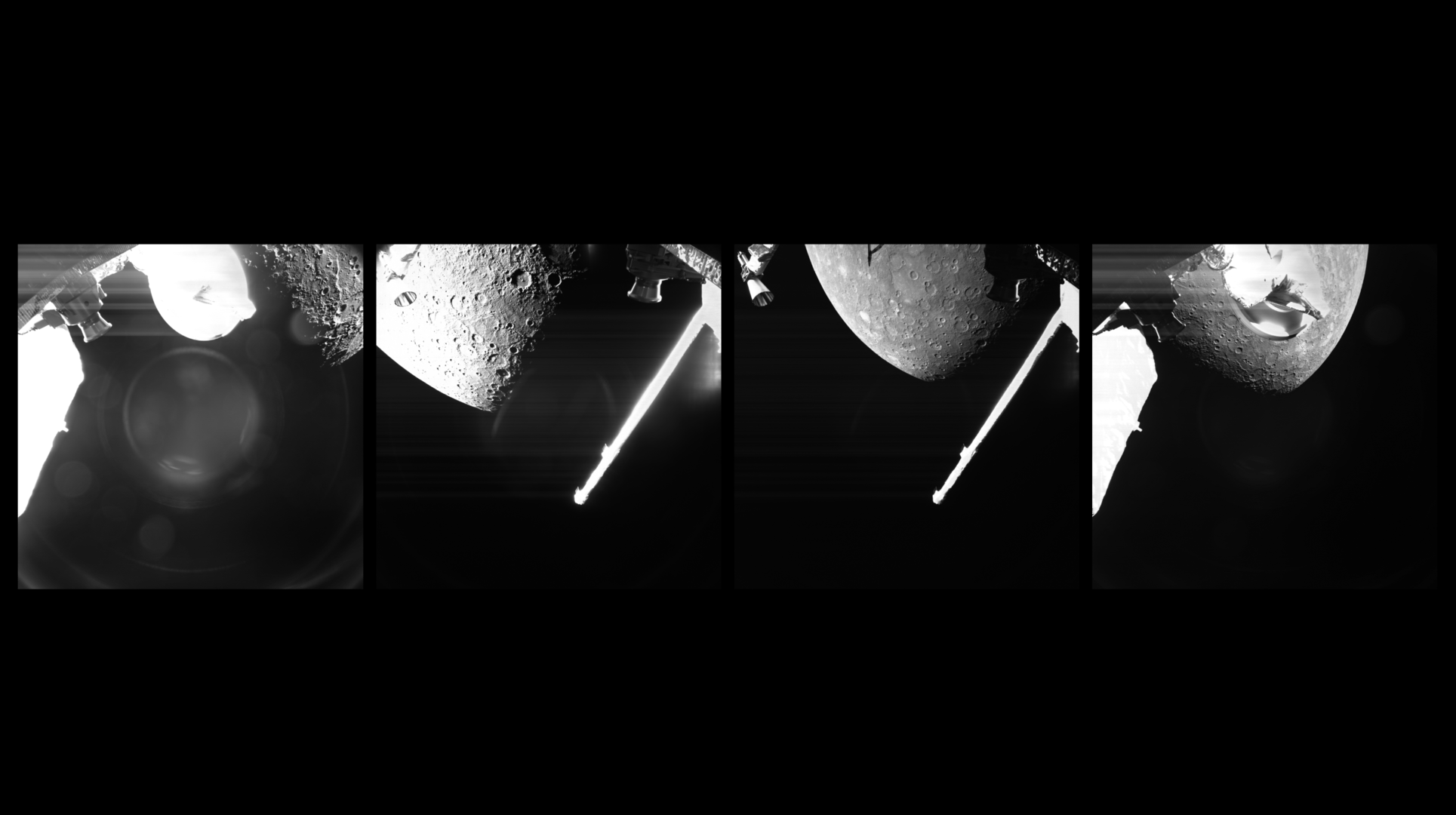 The ESA/JAXA BepiColombo mission has captured its first views of its destination planet Mercury as it swooped past in a close gravity assist flyby last night.
www.esa.int 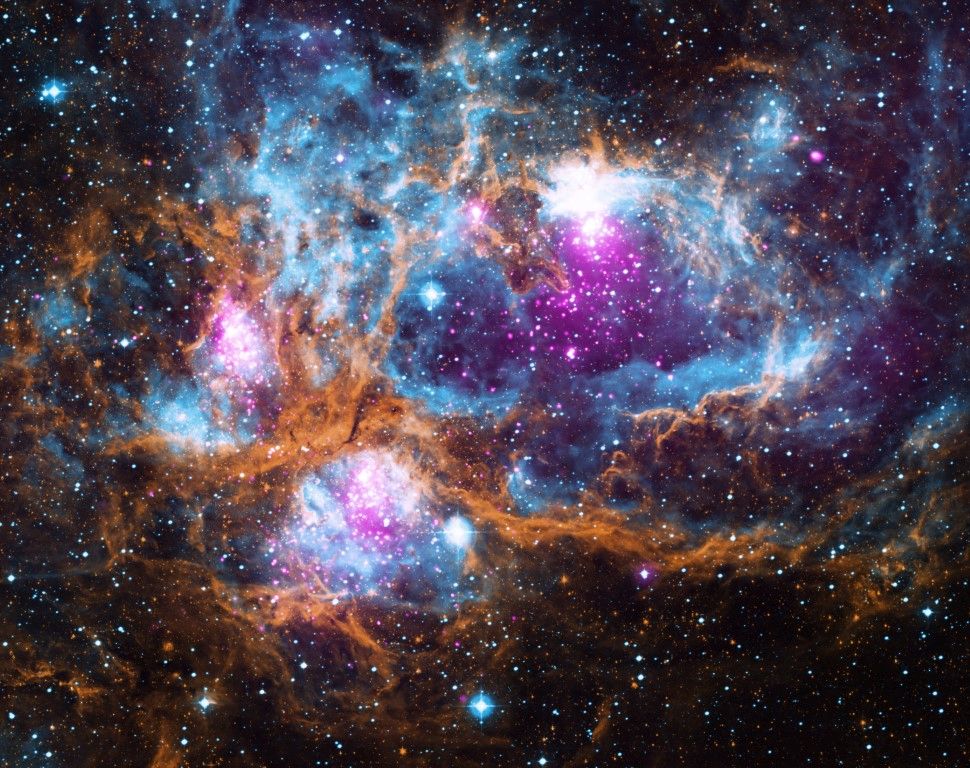 I am now employed

Thank you everyone for the words of encouragement; it is very much appreciated.

Famed in festival, story, and song the best known full moon is the Harvest Moon. For northern hemisphere dwellers that's a traditional name of the full moon nearest the September equinox. Seen from Saunderstown, Rhode Island, planet Earth, this Harvest Moon left a broad streak of warm hues as it rose through a twilight sky over the Newport Bridge. On September 20 its trail was captured in a single 22 minute exposure using a dense filter and a digital camera. Only two days later the September equinox marked a change of season and the beginning of autumn in the north. In fact, recognizing a season as the time between solstice and equinox, this Harvest Moon was the fourth full moon of the season, coming just before the astronomical end of northern summer. 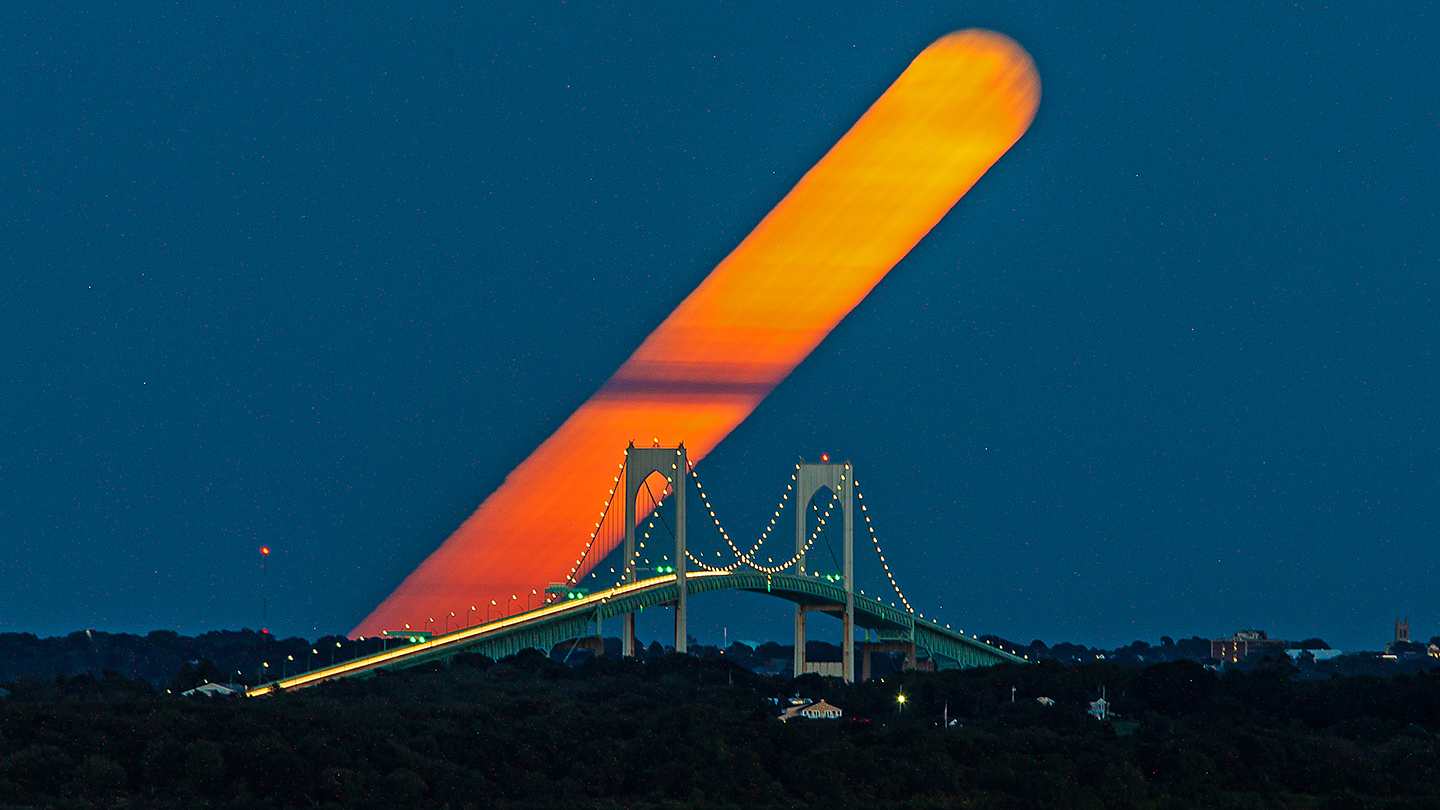 Dark markings and colorful clouds inhabit this stellar landscape. The deep and expansive view spans more than 30 full moons across crowded star fields toward the center of our Milky Way Galaxy. Cataloged in the early 20th century by astronomer E. E. Barnard, the obscuring interstellar dust clouds seen toward the right include B59, B72, B77 and B78, part of the Ophiuchus molecular cloud complex a mere 450 light-years away. To the eye their combined shape suggests a pipe stem and bowl, and so the dark nebula's popular name is the Pipe Nebula. Three bright nebulae gathered on the left are stellar nurseries some 5,000 light-years distant toward the constellation Sagittarius. In the 18th century astronomer Charles Messier included two of them in his catalog of bright clusters and nebulae; M8, the largest of the triplet, and colorful M20 just above. The third prominent emission region includes NGC 6559 at the far left. Itself divided by obscuring dust lanes, M20 is also known as the Trifid. M8's popular moniker is the Lagoon Nebula. 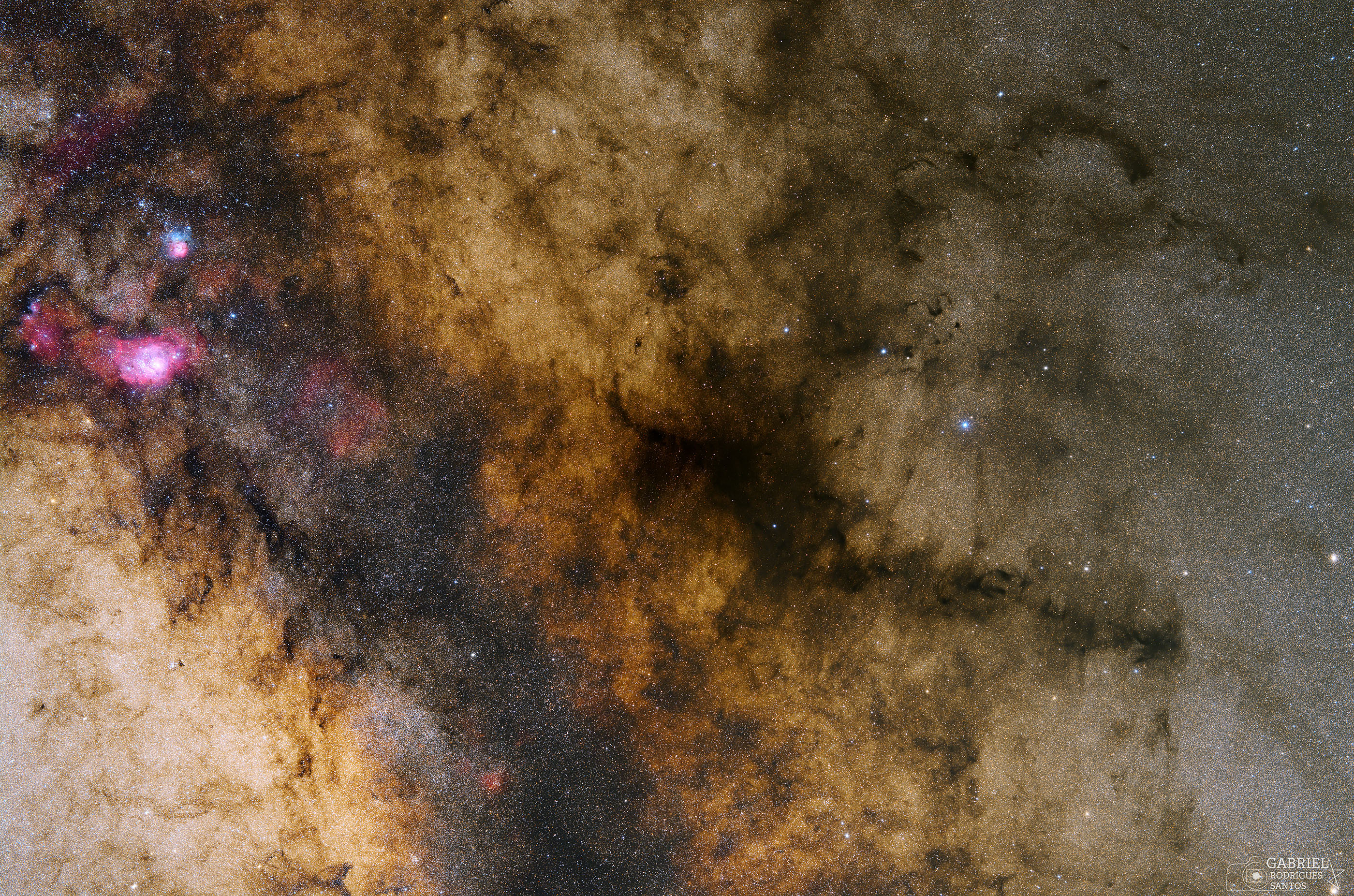 To the eye, this cosmic composition nicely balances the Bubble Nebula at the right with open star cluster M52. The pair would be lopsided on other scales, though. Embedded in a complex of interstellar dust and gas and blown by the winds from a single, massive O-type star, the Bubble Nebula, also known as NGC 7635, is a mere 10 light-years wide. On the other hand, M52 is a rich open cluster of around a thousand stars. The cluster is about 25 light-years across. Seen toward the northern boundary of Cassiopeia, distance estimates for the Bubble Nebula and associated cloud complex are around 11,000 light-years, while star cluster M52 lies nearly 5,000 light-years away. The wide telescopic field of view spans about 1.5 degrees on the sky or three times the apparent size of a full Moon. 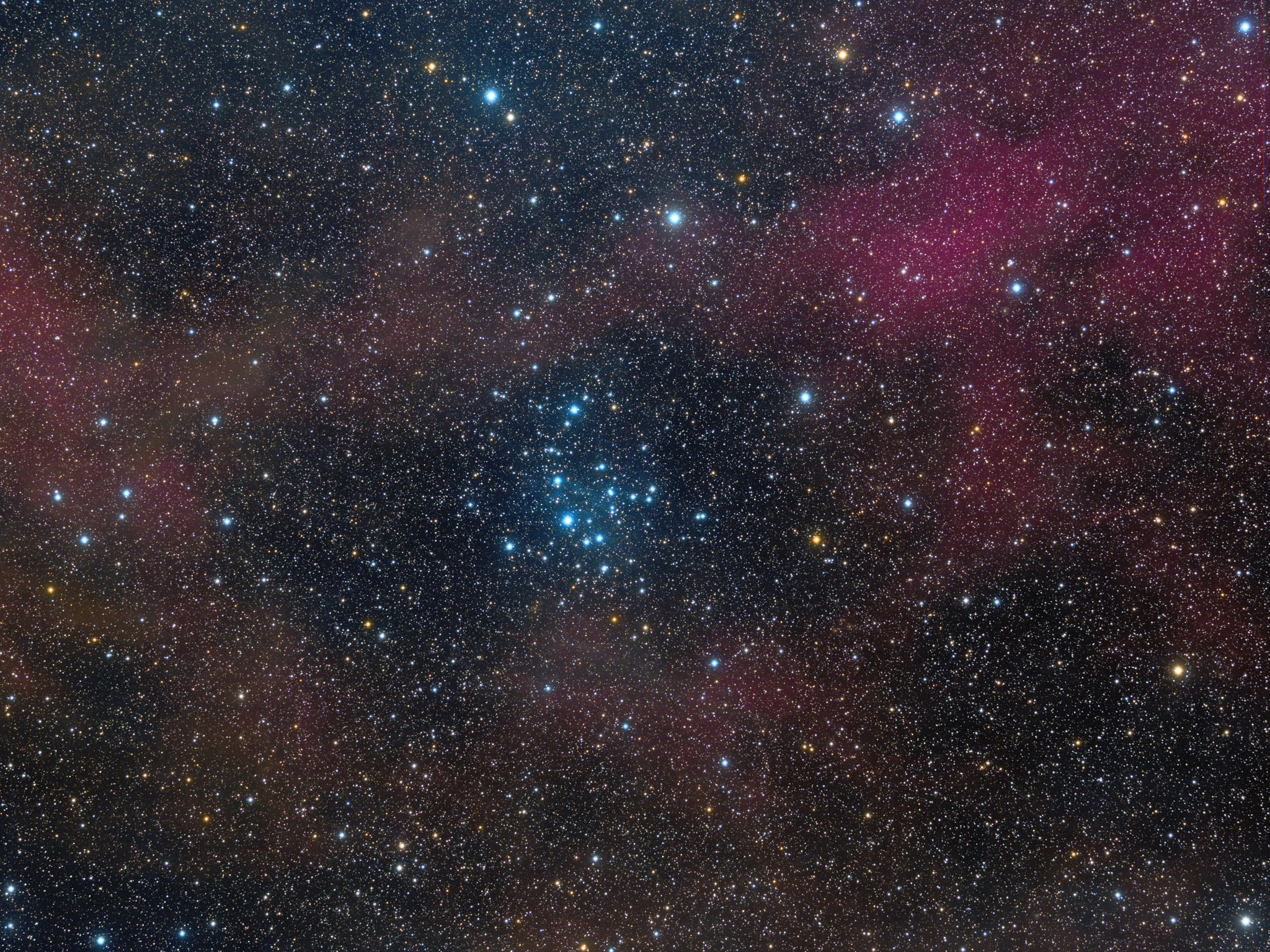 This image depicts the galaxy NGC 4535, in the constellation of Virgo (The Maiden), on a beautiful background full of many distant faint galaxies. Its almost circular appearance shows that we observe it nearly face-on. In the center of the galaxy, there is a well-defined bar structure, with dust lanes that curve sharply before the spiral arms break from the ends of the bar. The bluish color of the spiral arms points to the presence of a large number of hot young stars. In the center, however, older and cooler stars give the bulge of the galaxy a yellower appearance.
This visible image was made with the FORS1 instrument on ESO’s 8.2-metre Very Large Telescope. The galaxy can also be seen through smaller amateur telescopes, and was first observed by William Herschel in 1785. When seen through a smaller telescope, NGC 4535 has a hazy, ghostly appearance, which inspired the prominent amateur astronomer Leland S. Copeland to name it “The Lost Galaxy” in the 1950s.
NGC 4535 is one of the largest galaxies in the Virgo Cluster, a massive cluster of as many as 2000 galaxies, about 50 million light-years away. Although the Virgo Cluster is not much larger in diameter than the Local Group — the galaxy cluster to which the Milky Way belongs — it contains almost fifty times as many galaxies. 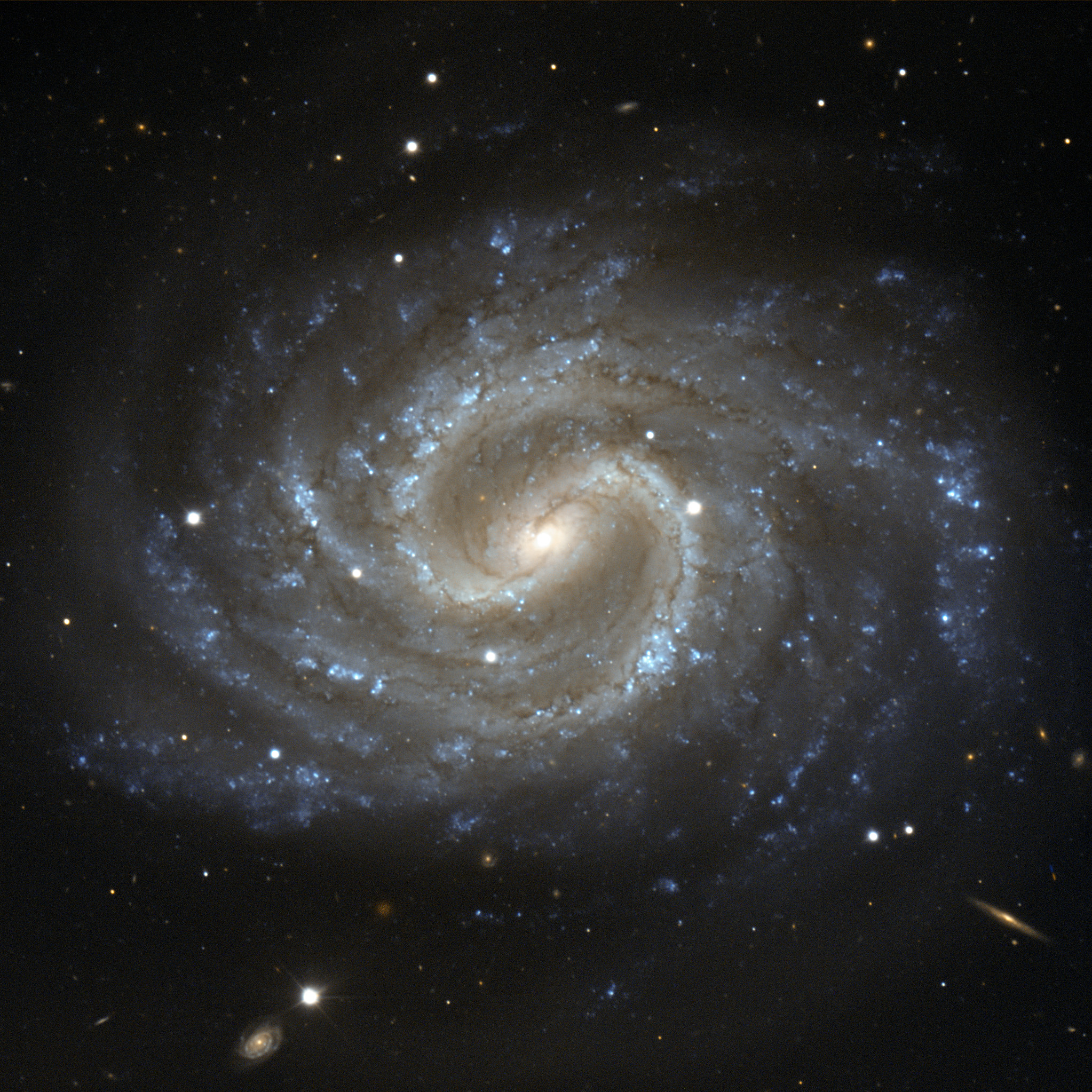 This image from ESO’s Very Large Telescope at the Paranal Observatory in Chile shows NGC 1637, a spiral galaxy located about 35 million light-years away in the constellation of Eridanus (The River). In 1999 scientists discovered a Type II supernova in this galaxy and followed its slow fading over the following years. 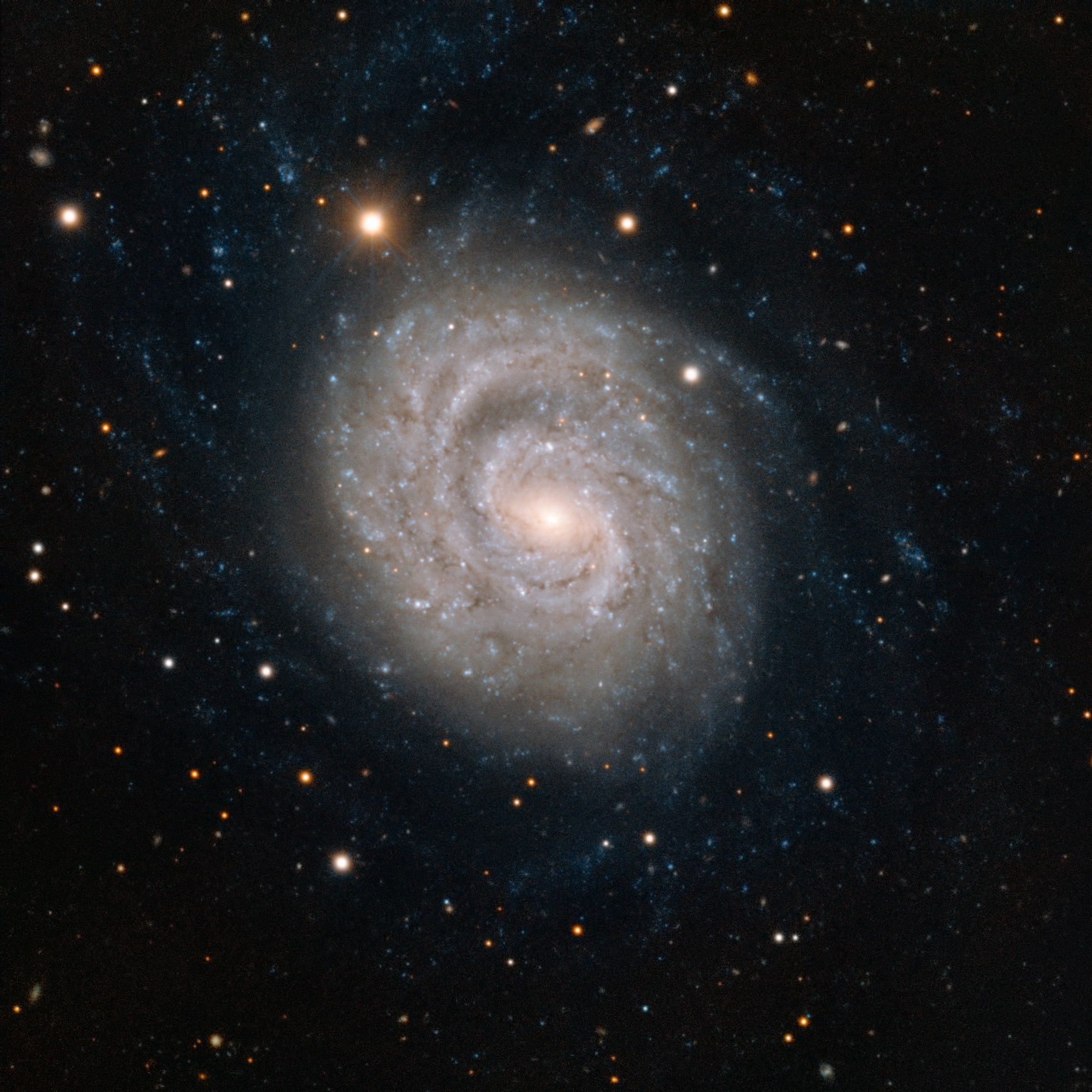 This picture shows the sky around the young star HD 100546 in the southern constellation of Musca (The Fly). It was created from images from the Digitized Sky Survey 2. The cross-like features that are centered on brighter stars, as well as the colored circles around them, are artifacts of the telescope and photographic process and are not real. 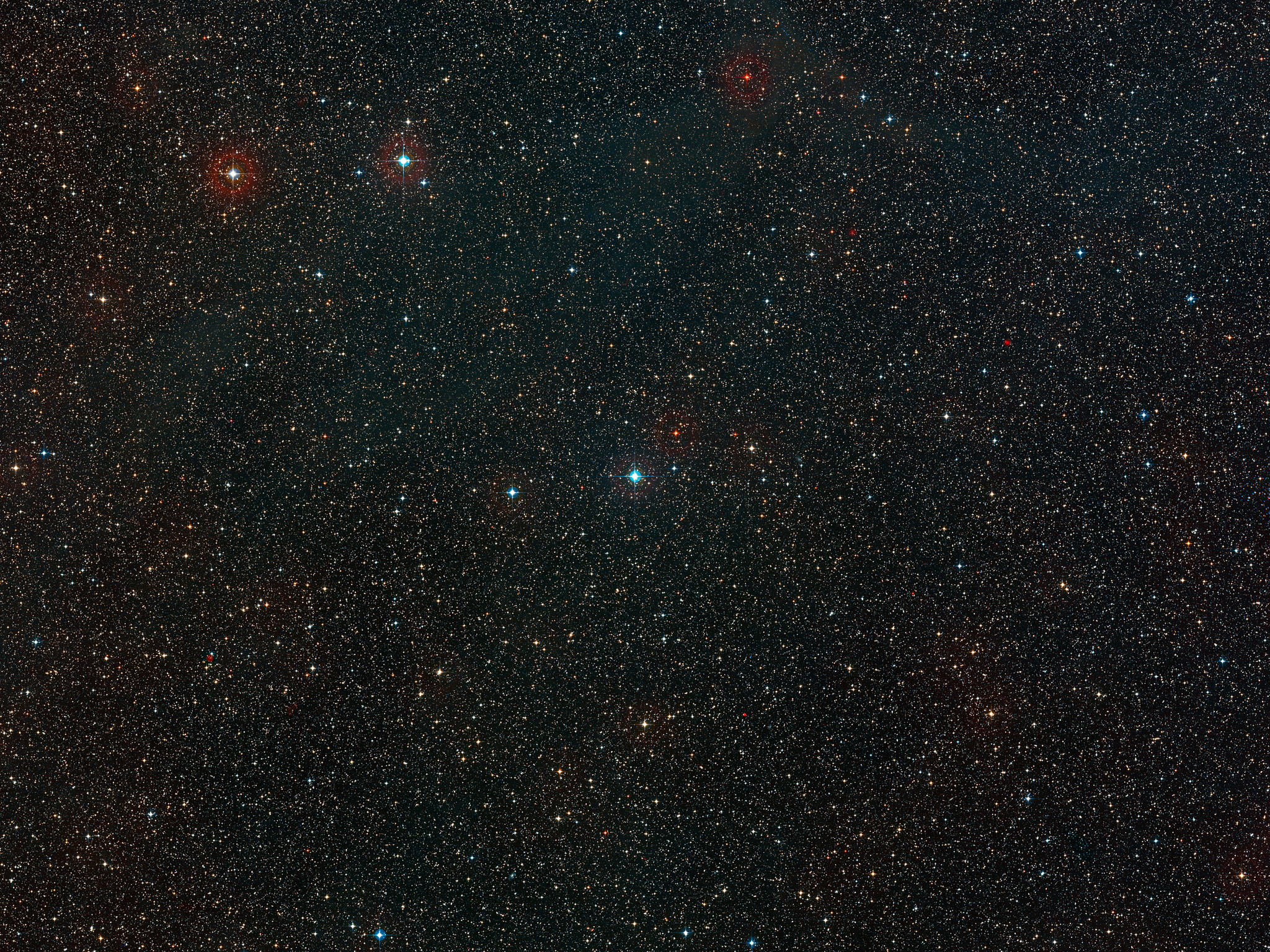 What must the orbital period be for a planet that orbits 3 stars? That hurts my head.

CrazyDiamond said:
I am now employed

Thank you everyone for the words of encouragement; it is very much appreciated.

Amazing image of Saturn courtesy of Hubble and NASA 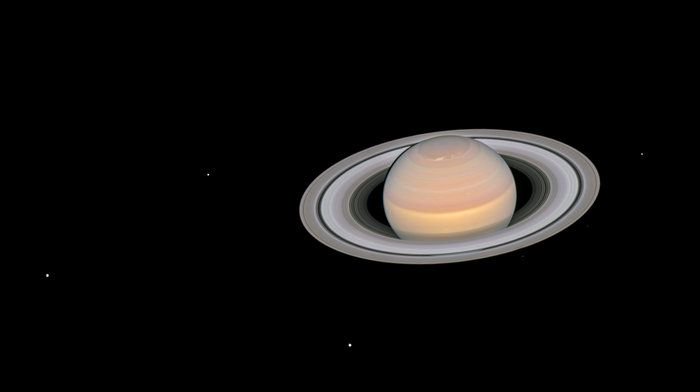 "The G2 Watches are in place due to the anticipated arrival of the 09 October full halo CME that was associated with an M1/2B flare from Region 2882 (N17, L=157) on 09 October at 0638 UTC. Latest analysis and model guidance shows CME arrival likely late on the 11 October into early 12 October UTC-days."

OMG!
I didn't have my tin foil hat on, and that thing must've blown right thru here...

Well, Captain Kirk has finally made it to the final frontier. Too bad he didn't have a pocket full of Nimoy's ashes. Scotty is already in space...
Launch actually takes place about 2:22 into the video..

cybrguy said:
Well, Captain Kirk has finally made it to the final frontier. Too bad he didn't have a pocket full of Nimoy's ashes. Scotty is already in
Click to expand...

Space ... the final frontier. These are the voyages of the starship Enterprise. Its five-year mission: to explore strange new worlds. To seek out new life and new civilizations. To boldly go where no man has gone before ...

The James Webb Space Telescope is set to launch into orbit in December 2021. Its mission is to search for the first light to ever shine in the universe.

Been waiting years for this guy. It is quite exciting that it is so near to being ready. 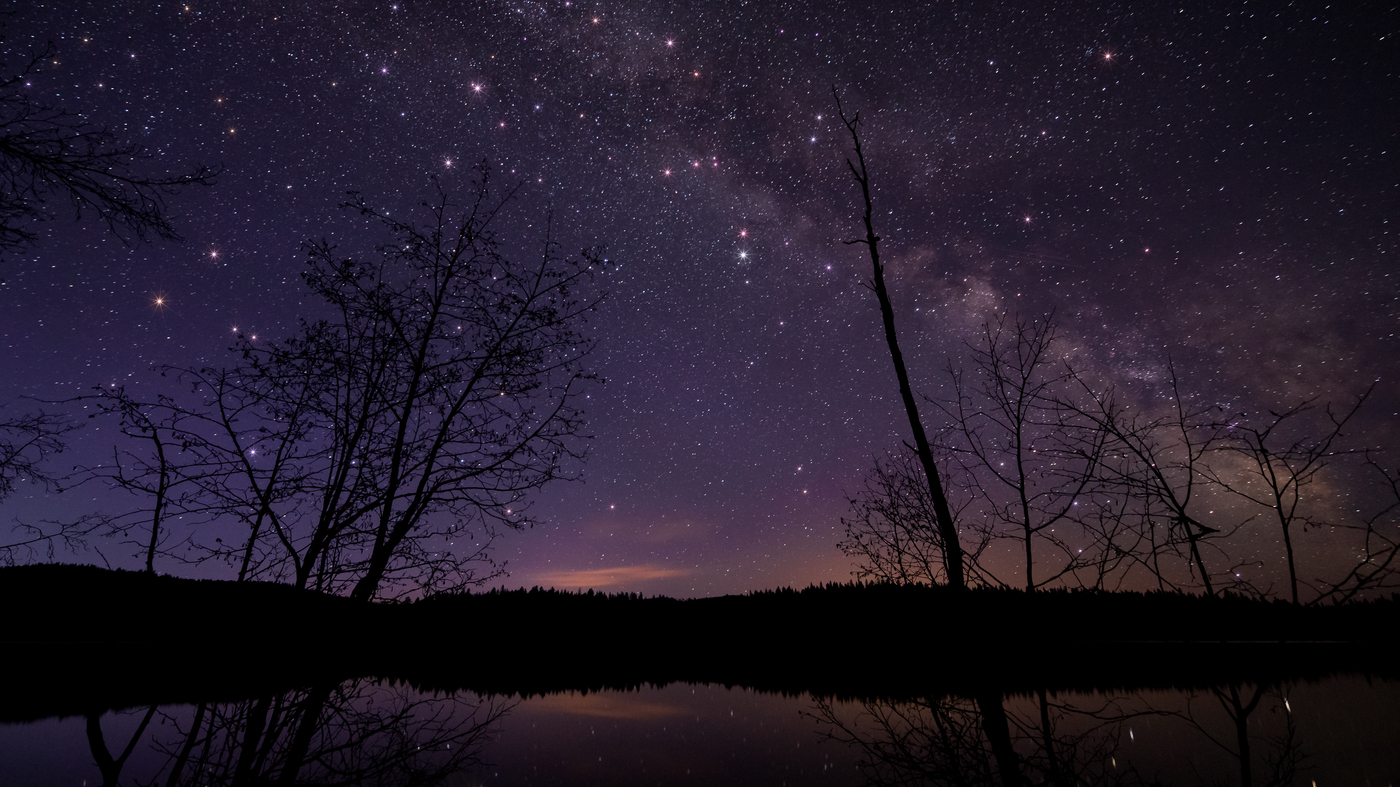 A meteorite crashes through a home in Canada, barely missing a woman's head

British Columbia resident Ruth Hamilton had a rude awakening earlier this month when a large meteorite plunged from space, through her roof and landed in her bed.

Maybe WE should hire him. It may take a wizard to get us through the next couple years intact...
----------
I'm sorry, but it starting to look like the Russians are trying to sabotage the space station. At what point do we take their keys away? Once is bad. Twice is unacceptable... A Russian actress and director are on the station filming a movie in space. They're supposed to return on the glitching spaceship. 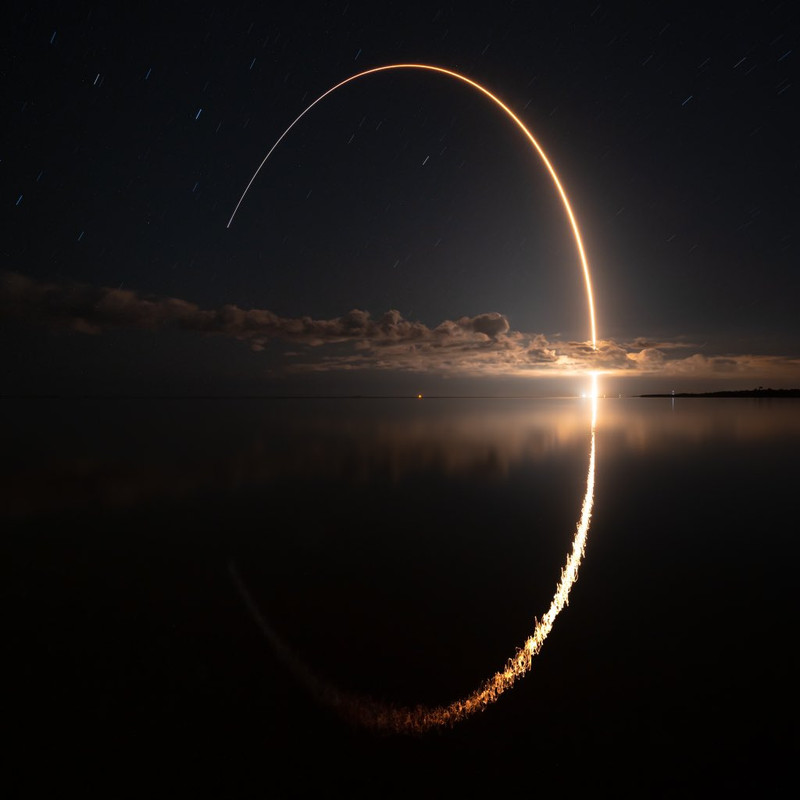 It was too early in the morning for me to get up and walk outside to see this one....beautiful weather here for a launch though, great pic Frank. 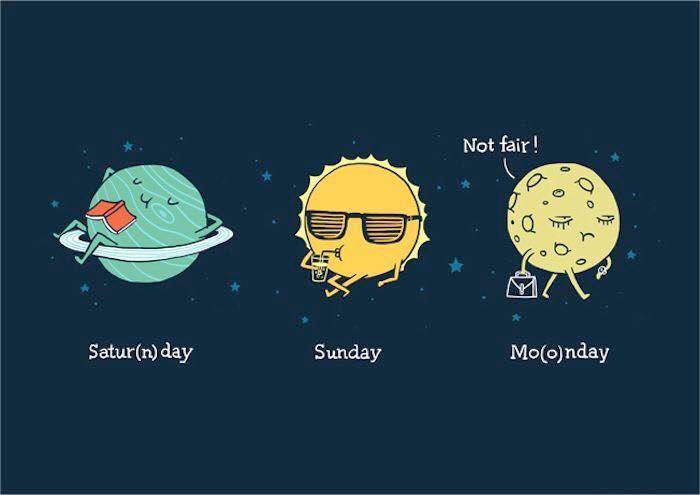