HI FC, I just bought a new Digital D-Nail. It just came out. I would like to share my thoughts with the membership. I did some searching and didn’t find a thread on this subject (found the older HE version last fall).

what is the best place and/or thread to share my comments?

what is it? is it a portable vape? a plug in? (I'm assuming it probably is) i did a search for it, but couldn't find anything.

my guess is it's an electric nail for doing dabs with? if so I'd say the plugin/home vapes section is where the thread should go.

looking forward to reading your thread.

Yes a digitally controlled ti nail 18/14mm. Similar to the highly educated one the had issues with last fall

Thanks for the info. Don't start many threads

if you can, in your post, link us to their site, and give us a pic or even better yet a vid!

Sure vid and images. I don't think they have a site. I got it from my lhs. They seem to use FB so I will use that. I just got it today so it work in progress, but since it new I thought I would document my thoughts/experiences and share
D

If you don't mind, how much are those going for? Are they 700 bucks like the enail?

dannkk said:
If you don't mind, how much are those going for? Are they 700 bucks like the enail?
Click to expand...

I paid $510 fir the TI version. They have many configuration with nail types and quartz nails. The TI lists for $600. However they have several newer models coming that are less.

Over the falls, in a barrel

Wow, if that's the price of the competition, the VB2's MSRP is completely reasonable.

http://www.tobaccoleafonline.com/ProductDetails.asp?ProductCode=6143059999
Found this one with a quick search, similar?

Edit*this one seems to give you a lot more options...smartsmokeshop.com/products-page/aroma-therapy-vaporizers/dnail/

If this is it, looks pretty badass photo rider great find can't wait to hear/see your results and thoughts.
Last edited: Oct 30, 2013

Very cool shit indeed! HE had a lot of problems with theirs, they canceled production of it because they were getting their asses kicked by it.

And only because you asked... you should've made a gear thread in the concentrates section. I'm sure a mod will move it though.

Over the falls, in a barrel 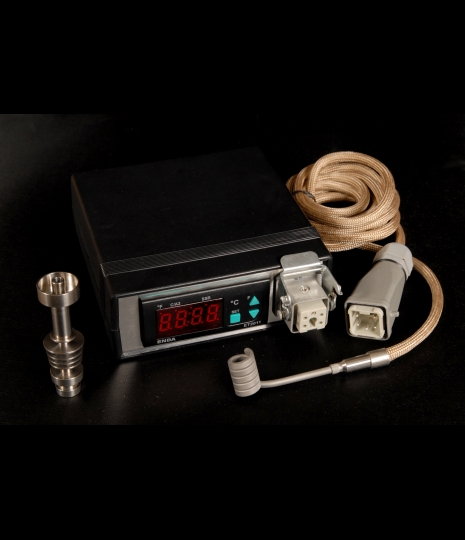 Be cooler if it had some sort of wand that eliminated the need for an aadditional rig.

^^Agreed but it'd also be a lot cooler if it was a hundred dollars cheaper too. I think anybody that would drop that much on a vape like this probably already has a piece (or two or three) in mind to pair it with though.

Seen some people around the net with a glass e-nail that the maker was selling for $200-300.
Unfortunately, it seemed like an underground production without any website or way to contact :-/

Wonder how these compare to something like enricos nail

z9 said:
Very cool shit indeed! HE had a lot of problems with theirs, they canceled production of it because they were getting their asses kicked by it.
Click to expand...

Seems the current production model no longer shares the same problems/inconsistencies. I guess when you are the first to introduce a new product to the market, you will encounter some problems.

I bet it's similar. even for me the apollo does a great job for doing normal sized dabs

Sorry guys... Didn’t want this thread too turn to a discussion. I’ll post another.

That picture is the product. I have the TI version, and knew about the others. Just friend D-Nail on FB and you will learn everything. They have a TI and a series of Quartz nails. Interesting the quartz cost more.

There is a difference between the thermo transfer of quartz verses TI. TI transfer heat much slower, but retains it longer (because it doesn’t transfer away as fast). Quartz is near instant and can combust also sooner. They have a write up here

They also have new version coming out which are cheaper. That is their mission is to reduce the cost. It still much cheaper than the HE version was and these people are friends.

You get 3 years of warranty where HE was less than a year. Also one free no questions asked heater. It can be another type like quartz if you have TI. You can do that anytime - to try the other type or wait and replace the heater after hours of use.
The new 1.12 version releasing this month has a gold braid cable, extended life heater and a new smaller connector standard. However they with support both connectors forever.

For me I switch it on and take dabs at will in about 3 minutes. Took it over a friends house tonight - another member and we just sat and dabbed at will. It does take some adj to get the temp that you like. Most people over heat their nails. This one doesn’t. We found 875F was good for taste. There is a little vape off after so it could bump a little. It will operate to 1000 (actually more, but said there wasn’t a reason and shortens heater life)

Its a male 14/18 nail so you need a F-F adapter for a DI, but they state that is done to force you to. Long term heat on the DI could harm it and the cost of a $15 adapter is good insurance.

Wait for it, I believe they will drop in price.

For me, I want my own pipe style, not for them to provide one. Course I collect pipes and have probably 150 headies, 50 recyclers etc.

This thing is the cat's meow so far.

Actually I had an old Greddy PROFEC boost controller in an MR2 that looked exactly like that minus the plug up front. Lol.

It is the real deal! I have been giving mine a run for about a week, and I LURVE it! Great customer service too! I have let the MFG know about us and he said he had already been a long time reader, and is very well versed in handling forum discussions, Q/A stuff! You can find D-Nail on FB if you are so inclined or at www.smartsmokeshop.com (Whattup, yo!!)

Mine was circa *00, but I got an amazing wooden case and the nices ti config! They do a lot of custom requests, but thiey will not like it if you cuss 'em too much!

Bluntcrush said:
It is the real deal! I have been giving mine a run for about a week, and I LURVE it! Great customer service too! I have let the MFG know about us and he said he had already been a long time reader, and is very well versed in handling forum discussions, Q/A stuff! You can find D-Nail on FB if you are so inclined or at www.smartsmokeshop.com (Whattup, yo!!)

Mine was circa *00, but I got an amazing wooden case and the nices ti config! They do a lot of custom requests, but thiey will not like it if you cuss 'em too much!

100% agree. great product, company and service.
Did you get the TI nail or quartz

I got TI with all adapters and upgrades! This thing is like a table top amusement park for concentrates! I even started making some extracts of eucalyptus and lemongrass (with an old extractor from the 60's for making perfume

) so that I can induce super nice sleepy time! Chamomile is next and then I go to market!!

Haven't started making any ho made weed concentrates yet, but it's on the bucket, now that I have this efficient piece of equipment!!

ive always wondered about ppl vaping eo like chamomile/lavender so on I kno they have oil burners for aeromotherapy but to directly inhale I was curious about. I was iffy and wanted to educate further b4 I did anything harmful due to the fact that a lot of eo have to be diluted to even rub on skin. any site u recommend for knowing whats safe to vape/huff/puff/huffpuff haha
have u seen vapor bros 2 nickname cheesbox all ceramic chalice so sick!
G

I paid for a dnail with the upgraded coils, ti and quartz, nearly 3 weeks ago directly from them. ive been texting them for almost a week trying to get my tracking number because they think they shipped it. but if they didn't I have to wait till feb when they resume production lol. I really wish I just would've drove 4 hours and bought one retail. if anyone has one im really curious as to what other people experience dealing with them.
You must log in or register to reply here.
Share:
Share Link
Top Bottom